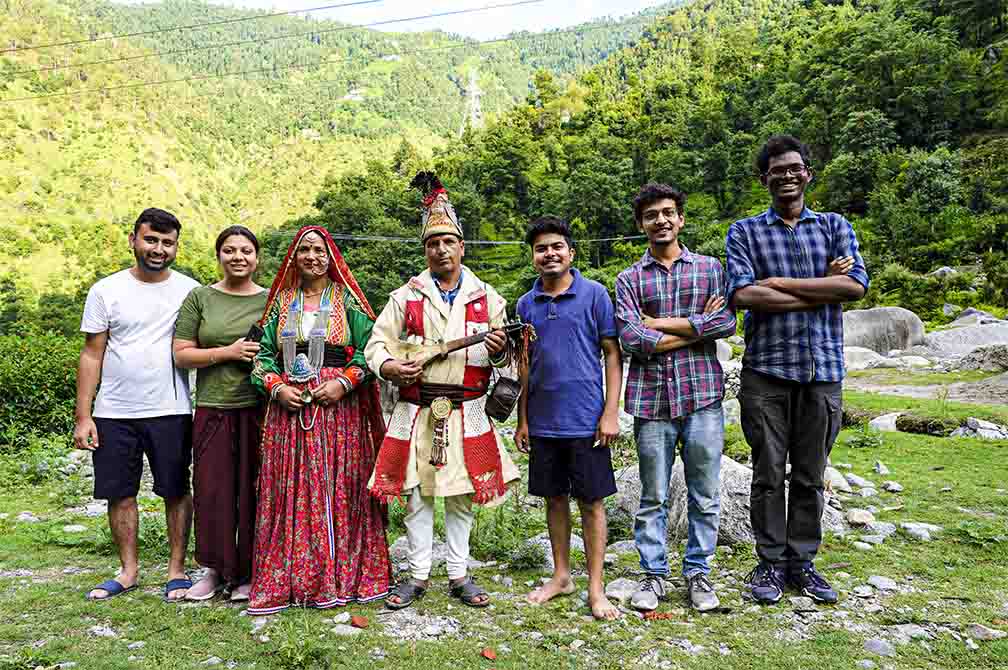 Hymns from the Hills

Roshan and Kanchan are yet another captivating gaddi music couple hailing from Bharmour. We came to know about Roshan from people who live in Chamba. Roshan is a local legend in Mangla. He is the first person who comes into the mind of people when a musada gayan has to

be done or a religious event or a wedding has to be done. after meeting roshan ji it appears he is  as gooda human as he is a singer. Roshan sings and plays ghungroo, ruvana and khanjari. Hsi wife kanchan sings and plays kensi or cymbals besides him.

The ruvana which he uses to lay music belongs to his grandfather and is 150 years old. He wants to pass this heritage to his children. He is tensed that what will happen after no one in his family pursued music. He even wishes that the government shall put a scheme to help folk musicians like him. He is even trying to teach his kids this art but somewhere he feels that they alone won’t be able to handle this great art form. The reason why he says the saem is beacuise is because tiem ahs change. Now people are inclined towards westernb music and western culture. Folk music might be the last thing people want to listen, understand and learn about. Eh explains that folk musicians earlier played a significant role in the society. Since those times there wasn’t any tv, ardio, internet and people were not literate, folk musicians played a quintessential role to spread the message of God. as people of himachal were religious from early, they use to listen to chapters of ramayana, mahabharat, shiva purana and others. What folk musicians used to do was to learn each chapter, understand it and tell or sing it to the masses during musada gayan which is like a jagrata. After each chapter the musician use to explain it to people. But with the advent of television and people becoming more literate they don’t depend on musicians for religious sermon. Alsp due to westernization, people are more into western music and disco and other things. Another problem is people like to make new music by emerging folk with western music which he frowned upon and also the elders of the family don’t like it.

Music of chamba is based on nature,. Weddings, seasons, relationships among people are common topics. Folk tales which are ancient are important ingredients of chamber music. Due to the rain there were some problems on how will we shoot and would it be possible to do it today. We tried to make good use of time. We conversed with the folk musicians in detail to get to know about their lifestyle and their  culture. It was a two way road. We also talked about how our ngo works. It was a great chit chat followed by a small music ajm which we did together. They told us about their music and folk songs in the most intricate details. While we were talking about songs we also came to know about personal life about the couple. Kanchan helps Roshan in every aspect of life. She sometimes counsels ehr in problems. Eh talks about teachings which eh got from his father and forefathers. He also took a teacher cum mentor who taught to play ruvana. Since they follow guru shishya parampara he is also supposed to give him guru dakshina.

Due to drizzle the river bank became even more beautiful. We could hear the sound of the wind whistling around and the waters flowing in the nearby stream.We were thrilled to hear the first song which was “chamba aar.’ Chamba aar ki nadiya paar talks about a romance between lovers. The young man asks his lover what does she needs as he is going to Chamba. He beautifully describes the beauty of Chamba, its rivers, its wealth and everything else.

The next song which they sing was on traditional religious singing called Musada. They sang “hawkeye jogiya”d and this song is sung during weddings, the ritual associated with it is that during the wedding, the groom is supposed to dress like a monk and ask for offering. This is with respect to the hindy myth in which Lord shiva, when he was getting married to Sati, dressed himself as monk and asked for offerings.teh song details about various pilgrimage sites present in the country.

In the song it is asked which all pilgrimage sites have you visited and the groom or Lord shiva answers that I have visited gauri kund, shiva stotra, manimahesh, badrinath, kedarnath, yamunotri, gangotri, etc. Lord Shiva mention that if someone goes to these sites than all his sins will be forgiven.

Roshan’s love for music could be seen by his love for his musical instruments especially his ruvana which is 150 years old and belonged to his father. Ruvana is made up of chir or as locally called khumani. The strings were earlier made up of goat’s intestines but now they are made up of nylon. It is a belief that Lord Krishna made it and gave it to Sudama who played it. He says that there is a belief of tying sacred threads or dori at the end of ruvana during puja and asking prayers while the musician plays. It is a wish which one makes to Lord Satya Narayana. Apart from ruvana which is a string instrument, he plays khanjari which is a small dafli like instrument and ghungroo, which he ties on his left wrist. Khanjari is made up of walnut wood. Kanchan accompanies Roshan by singing and playing kalsi or cymbals. Apart from the musada gayan, the songs they sing are about Nature, mainly emphasizing on rivers and mountains, different seasons and lives of people. Apart from this, Roshan also writes songs. The main inspiration for writing songs is Nature. He writes how he feels and what emotions goes through him when he travels through the hills or valleys. The couple belongs to the Gaddi community. The people of the community were historically shepherds and used to graze sheep and cows in high altitude pastures of Himalayas. It is believed that a lot of compositions were made by people while grazing their animals. They are avid worshippers of Lord Shiva and their devotion is visible in their songs. The community has a rich culture, from bright costumes for both men and women to cultural festivals like Basua or Baisakhi, Minjar Mela, etc.

Roshan lives with his mother and his three children, all of whom are studying. He wished his sons to continue his legacy to spread traditional Pahadi music. Although their village has all the basic facilities and infrastructures like electricity, schools and healthcare, their lives are difficult at times during extreme weather conditions. So he and his brothers made a house in Mangala in Chamba where they shift during the winter months. Singing is the only source which brings finance to their home so they do it with utmost passion and love. Very occasionally they go to Bharmour for farming and grazing cattle when they don’t have any other means to generate money.