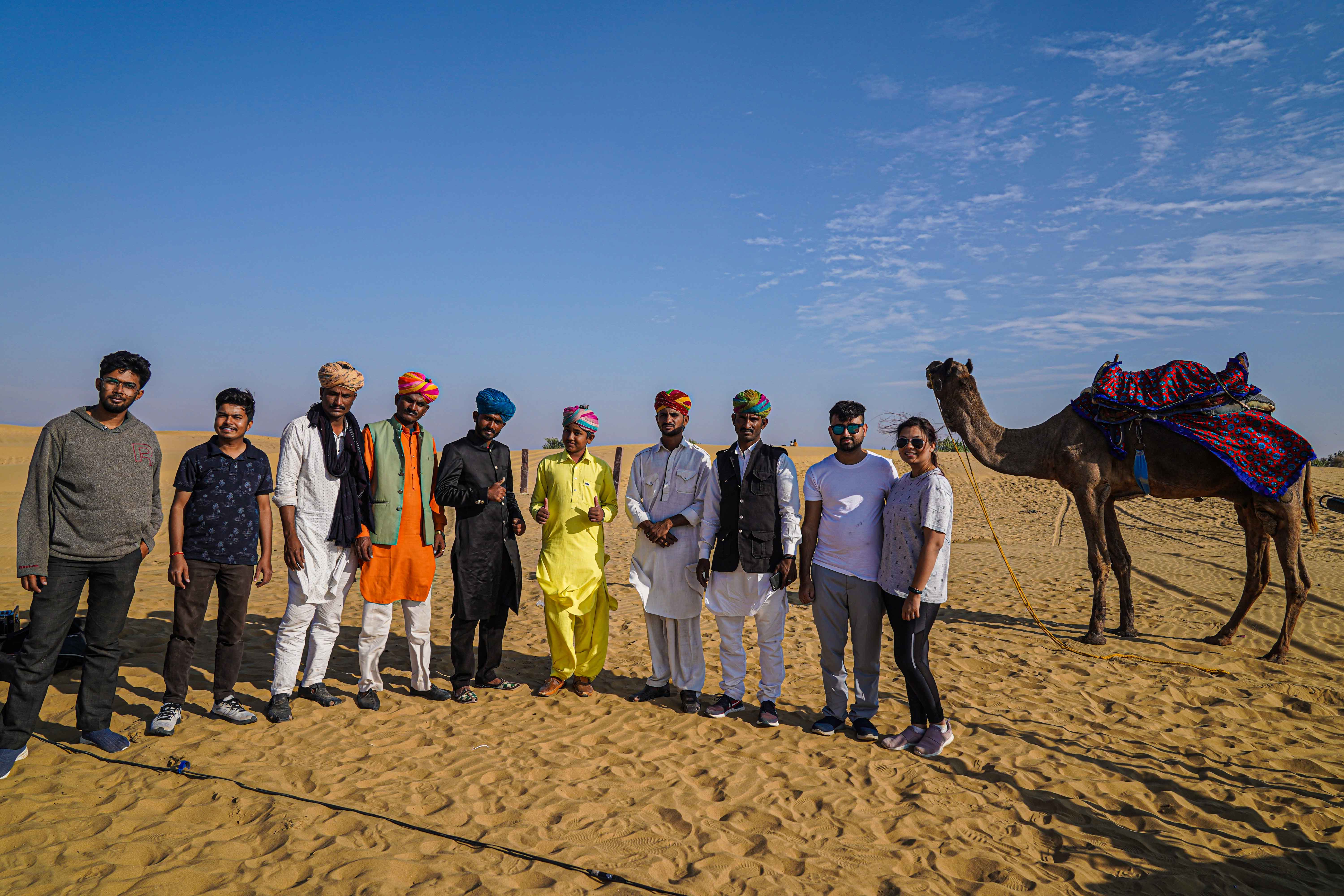 As much as Jaisalmer is filled with the golden sand, it’s also filled with traditional folk melodies, which echo stories of generations, imbibed with these melodies. Habib Khan hails from the Mirari tribe that resides in Chelak village in Jaisalmer district of Rajasthan. Their tribe is a part of the Manganiyar community of the state which had been quite popular since the time of Rajput rulers who have protected them and become their patrons over the historic years during the medieval times. This group specifically considers the Bhati family as their patrons and has been providing them with their musical flair for many years.

Habib Khan’s family has been into music for generations, and he, himself has been learning music ever since he remembers. The eyes of this 35-year-old singer from the Manganiyar community of Rajasthan light up as he starts speaking about his music with all the passion.

The group also has 5 other members, and all of them are related to each other. Basically, their whole bloodline is musical. Habib Khan was brought up in a musical environment and has been singing these folk songs since his childhood.

Like most of the Manganiyaars, this group songs also has various range of themes like marriage, love, separation, childbirth and the special occasions in a family. Various families in Jaisalmer, have been their patrons for ages, and their economy is dependent on music. Their musical groups are called to perform on these occasions, and this group has performed at various destinations in India and Habib Khan has also travelled and lived in Washington, California and New York for workshops. He also collaborates with other musical groups from time to time.

September to February is the peak season when most of the occasions like marriage take place, and when they get their most business. Habib Khan has learned music from his father and his children are also being trained in music currently. The main instruments used by his group are Khamaicha, Dholak, Harmonium, Morchang, Khadtaal, and Algoza. The main recurring raagas in their songs being Shubh, Kalyan and Bhairav. Like other Manganiyaars, they also believe that traditionally, and as per mythology, there were 6 main raagas, and each raga has 5 wives, making it a total of 36 raagas, which forms the base of their classical music vocabulary. While most raagas are meant to be sung at a particular time, as per the time-theory of music, Raag Bhairavi is considered to be “Sada-suhaagan” (literal meaning, forever married). He considers bhairavi to be one of the most important raags, which can be sung at any time and any occasion.

These ragas used by Habib Khan also hints of influences from Guru Granth Sahib, According to the Guru Granth the first raga created by the Maker was Bhairav, and raga Bhairav had five raginis of which only the first, raga Bhairavi is known today and performed. The folk songs of Rajasthan have maintained the elements of Indian classical music despite the fact that they are freely composed and sung, knowing no rigid rules. At times, their audience also demands popular songs, which have been imbibed into Bollywood, and they are more than happy to oblige since they consider that music is essential for enjoyment. When asked about his future plans, Habib khan says that he wants his children and the upcoming generations to carry forward this musical tradition while keeping their formal education in a healthy balance.

Habib Khan’s music is mesmerizing and his deep, baritone voice keeps the mood of the music alive. They combine their love for music and the skill for the same to make musical masterpieces, and timeless harmonies. Interestingly, the lyrics to these songs are quite simple, yet they are capable of evoking heartfelt human emotions.

Nowadays, in order to keep the musical tradition alive, is difficult, since many songs are lost with time, owing to the influx of popular music, therefore recognition of these artists is essential as they form the part of intangible heritage of Rajasthan. A culture to be nourished, enhanced and shared. Poetic and lyrical melodies echo in this never-ending Thar, and its every sand grain.

They focus on Rajasthani folk music and make songs dedicated to various auspicious occasions for the royal family. Using their creativity for writing lyrics and using folk melodies in order to convey their messages, they sing about weddings, birth, and death ceremonies for these families as well as their whole community. Along with Satar Khan, Bhutte Khan, Salim Khan’s melodious music and Devu Khan’s vocal ability, they have a group that has mastered all the traditional Rajasthani musical instruments like Dholak, Khartal, and Harmonium.

Their knowledge in the theory of Indian classical music such as different ragas and talas separates them from other folk groups as communities of the country. Habib Khan’s group, in particular, pays a certain amount of preference to the Kalyan raga which is usually played at dusk. They have performed in various Indian cities but found performing in Mumbai the most exciting and rewarding.

They come from humble backgrounds but have a vigorous desire to create and perform their art not just to make a living but contribute to their community’s musical culture. They have come together form similar walks of life and different age groups to form a clique in order to showcase their skills and abilities to promote the culture of Rajasthan and set it on a path of prosperity.