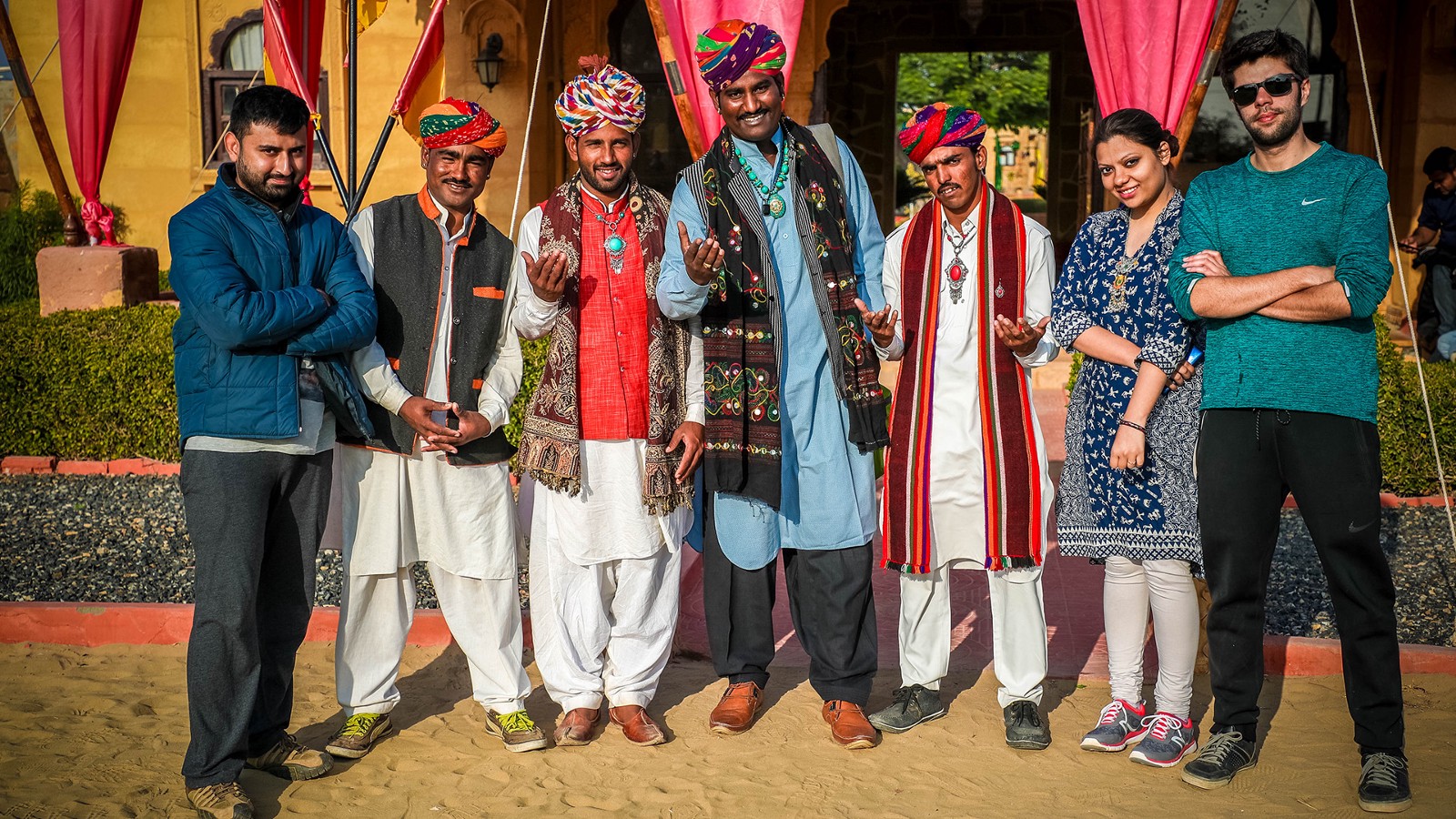 Sublime of Folk and Culture in the Dunes

My anklets are tinkling loudly, and the whole palace is awake.

Please speak to me in a romantic way.

My anklets are tinkling loudly

Romance and abandonment are recurring themes in Manganiyaar Music. The various manifestations of these themes are seen in the beautiful Raagas blended into soulful compositions, which are simplistic in language but are complex in their themes. It seems that the music is embedded in each and every grain of this Jaisalmer desert. Often known as “Jaisaan” in the local Marwari dialect, Jaisalmer, in that sense, becomes an essential theme in itself for their music.

Thanu Khan is from Barna village in Jaisalmer, Rajasthan. He belongs from the Manganiyaar community of the Rajasthan and hails from a generation of musicians where musical traditions have been transferred through generations. This talented musician started learning Morchang at the age of 8 and has already performed at various venues both in India and abroad. He started performing at Gajendra Singh’s The Mama’s Resort and Camps and started getting noticed. Thereafter, he has travelled almost half the world for his performances. He really takes pride in representing India on a global platform and feels special when people insist on getting their photographs clicked with him and his traditional attire.

One particular thing which is noteworthy in the Manganiyaar community, as many of them describe is that they are Hindu in their pattern, but are Islamic in their religious beliefs. They are indeed, a true representation of communal harmony, and their music is beyond the barriers of religion, culture and caste. Even though he hails from a Muslim Manganiyaar community, he sings bhajans of Krishna. Children here are born with the inherited passion and zeal for music.

Although, the children are not very academically inclined since they are dedicated to music since they are barely 3 or 4 years old, yet, they manage to make sufficient living by pursuing their passion for music. He sings all types of songs whether it is Bollywood, Bhajan, Fusion, Folk, etc. He has given fusion performances with Pandit Vishwa Mohan Bhatt and his son Pandit Saleel Bhatt at various shows throughout the world. He has proudly presented his folk music at various international venues.

He sings in all the raga whether it is desh, bhairavi, kalyani, sorath, etc., amongst all the raags his favourite is desh raag. Raga Desh or Raga Des is a Hindustani classical music raga. It is commonly used in songs with a sentimental patriotic feel. Thanu Khan loses himself in the trance as he renders a beautiful melody of a romantic tale in Sorath Raaga.

The high palace is decorated elaborately

The king and the queen are asleep in the winter season

Please speak to me in a romantic way.

My anklets are tinkling loudly

The classical Raagas used by the Manganiyaars also have some considerable influence from Guru Granth Sahib. Sorath is an India musical raga (musical mode) that appears in the Sikh tradition from northern India and is part of the Sikh holy scripture called Sri Guru Granth Sahib. Every raga has a strict set of rules which govern the number of notes that can be used; which notes can be used; and their interplay that has to be adhered to for the composition of a tune. Raga Sorath appears in the Ragmala as a ragini of Raga Megha; today it belongs to the Khamaj that. As per tradition, there were 6 original Raagas, and each of them had 5 wives known as Raginis, making it a total of 36 Raagas. Sorath belongs to the cold season and is performed in the first quarter of the night. The mood is light and cheerful, with a pleasing sound resembling Raga Desh. Originally, the texts composed to this raga show how the words of the Guru can enlighten the mind, yet here the Raaga is used in an entirely different context, a romantic one!!

All fears vanish and one is filled with bliss.

Another song by Thanu Khan, Ambavadi, set in Raag Shubh, tells the pre-wedding preparations in a house, when everything is decked up and various preparations are being made, to celebrate.

I have planted a mango orchard for you, and have painted my bungalow

Bring a Joshi’s(pandit) son, for writing the alliance and finding an auspicious muhurat.

I have planted a mango orchard for you

From the themes of abandonment, romance and marriage, Manganiyaar music has everything to offer to a music lover. It is particularly interesting how these traditional raagas from the Hindustani Classical system of music are adapted and sung and moulded into various styles of music, which may seem unfathomable, yet, the poetry in their music is what keeps the golden city of Jaisalmer alive, and the musical tradition will live on for years to come.