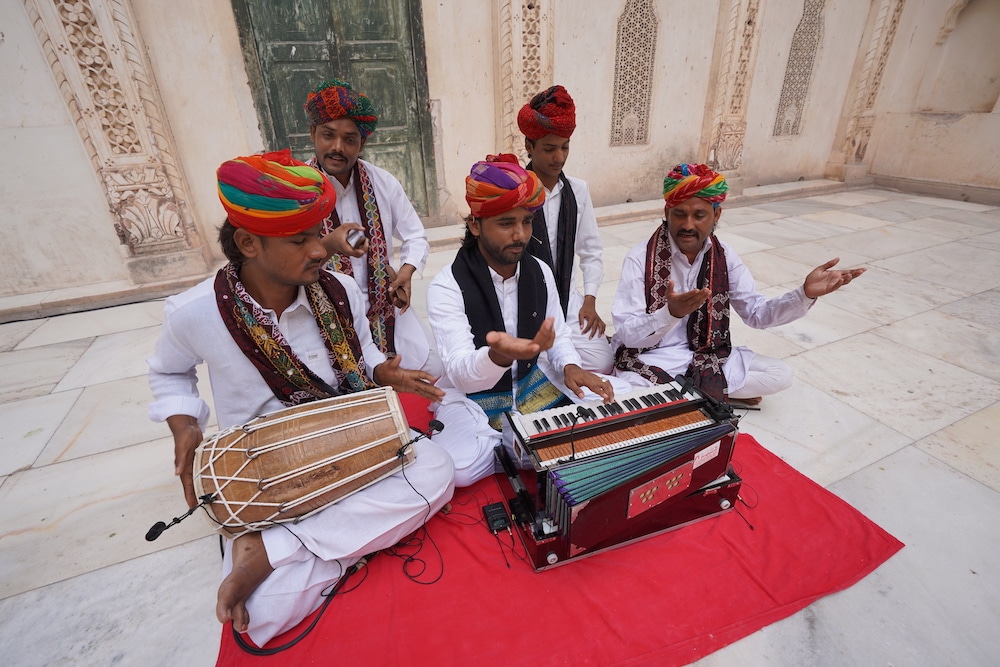 Musical Affairs Amidst Land of Desert

Roaming in the grand city of Jodhpur, we came across a wonderful Langha group who had then just arrived from their village, Phalaudi. They were looking for a place to sit and jam since they had an event in the night on the same day. Meanwhile, we had just stepped out of the Mehrangarh Fort and caught glimpse of them setting up. As the group settled Rafeek took a beautiful alaap and began :

Our land and its people are unique

Every house has weddings

Each house has traditional dances and plays dhol

Mesmerised by the wordings and rhythm of the song we decided to stay longer and get acquaintance with the group and their music. Rafeek told us that he has been singing and performing ever since he was a child with his father. He dreams of getting a chance to sing with singers like Rahat Fateh Ali and Kailash Kher. His group told us that being from a Langha community they mostly sing songs about the brides -grooms, wedding processions and various other occasions. The group is an expert in Rajasthani folk, Sufi and Ghazal forms of singing. The Sufi genre is their favourite owing to the sheer, poetic words of Urdu language. As a group they want to impart musical knowledge to their children but only after they are educated well. They get 10-12 shows per month and earns around Rs.6000 for each show. They are not very educated and so got into music because of financial reasons.

Just like all the families in their communities, music is been carried forward by mostly male members and it is the only source of income in his family. The group feels that are born to do something big and for them, it is the songs which they know they want to do good to them. They want the world to hear their music and know about their culture and traditions. Moreover, they also want their music to be so much heard that people including their children feel inclined towards learning it. Telling us this Rafeek and his group started singing one of their favourite songs –

Saajan aaya re he sakhi

Oh, my friend, my dear husband has come

How should I welcome him, he has come after so many days