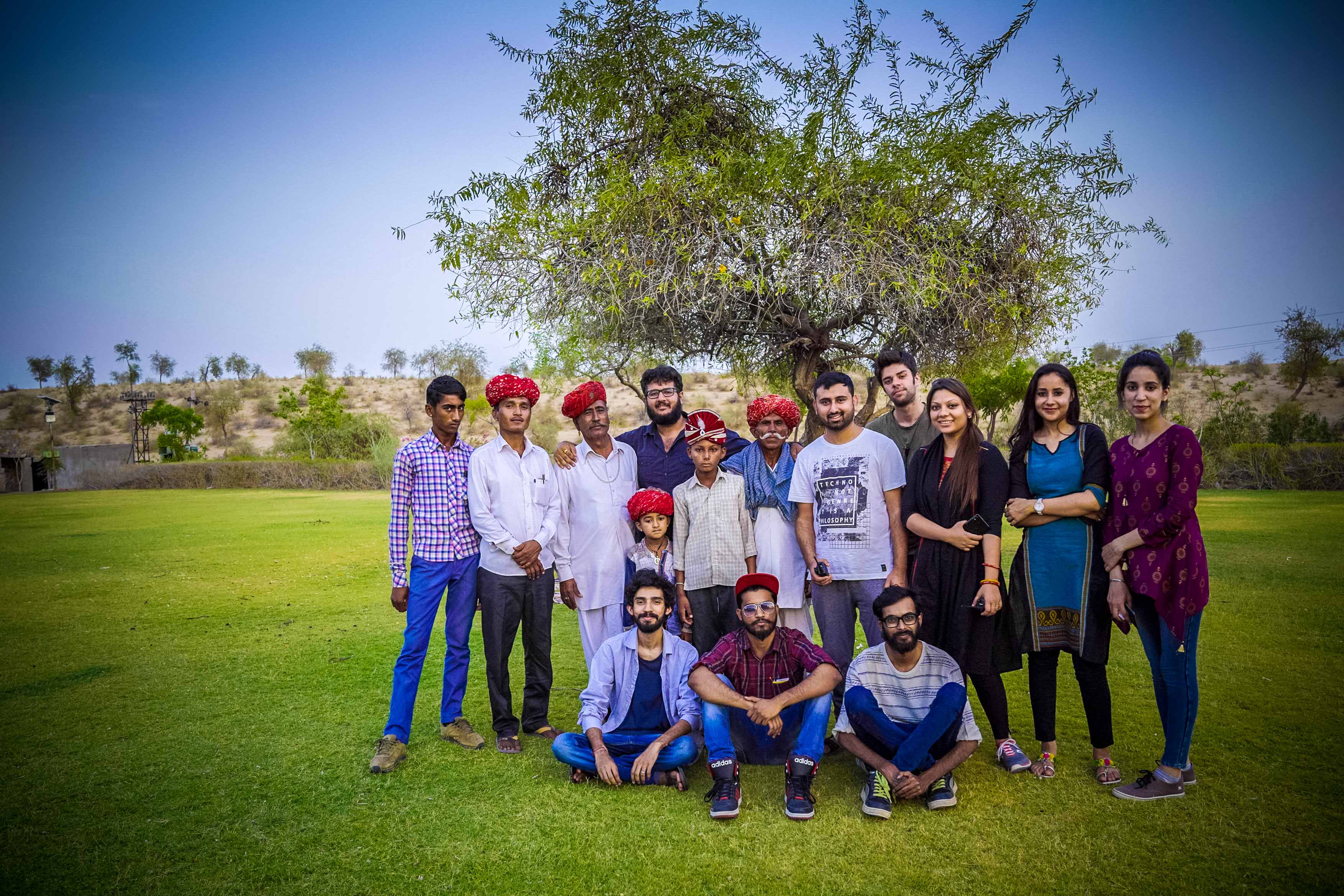 Kehra Raam is a 62 years old ‘young’ musician living in the Sanpa village of Barmer, Rajasthan. The team met Kehra Ram in Barmer and was pleased to see the happy and content faces of Kehra Ram and his fellow musicians in the scorching heat and soaring temperatures of Rajasthan. He has been into Meghwal folk music since a very tender age, and says ‘Even a newborn child in Rajasthan cries in Sur’ since birth’. His grandson’s innocent laugh enthusiastically gave a nod to Kehra Ram’s statement.

He has a large family of 9 people: his mother, son Ganga Ram, wife Gayidev, along with other members. Kehra Ram is associated with the Meghwal tribe of Rajasthan, which comes under the scheduled caste. He enlightened the team about how Baba Ramdevji has always looked after the Meghwal tribe, as a guiding angel. Kehra Ram was not able to complete his education because of financial instability, but always had a deep interest in music: he learnt songs from old books and memorised some after listening from others in his own family and community. His group members are usually family members or people from his community.

Kehra Ram’s interest in music heightened primarily because of his father and uncle, who inspired him to explore the avenues of religious folk music. He sings bhajans and plays tandoora, which is a folk instrument similar to Veena. The tandoora is more popularly known as the Chautara or Nissan and is a commonly played, five-stringed drone instrument. It accompanies devotional music and is a variation on the Ektaara which is one of the oldest string instruments. Tandoora is made from wood and its base is usually constructed out of the dried gourd. It is strewn with four strings that can be tuned to different pitches to the convenience of the player and the instrument is played with two fingers. The Manganiyar Meghwal, Nath Jogi and Meerasi Bhajan Mandali (devotional singing groups) in parts of Rajasthan commonly use this instrument.

Kehra Ramji has studied till the fifth standard. He used to work as a labourer earlier. He learnt hymns because of the tradition, and to some extent also because of his own inclination towards religious and devotional music and worship of Ramdevji. Kehra Ram has been performing for the past 36 years and has been deeply involved in the music. His never-ending quest to learn new instruments is simply commendable. Besides tandoora, he can play harmonium and dholak.

Kehra Ram, sometimes, plays Rajasthani folk music, but not much because according to him, he, as a Meghwal, tends to get shy while singing the regional folk songs. He finds more comfort in devotional music dedicated to the Gods and Goddesses, and how we, as human beings, should tread the path leading to the ‘Absolute Truth’.

Kehra Ram along with his group members usually performs Lok Devta’s bhajans for ‘Satsang’, and as per the tradition followed by Meghwals, distributes ‘prasaad’ after the auspicious ceremony of completion of the ‘Satsanga’. The word ‘Satsanga’ is the combination of the two words ‘Sat’ and ‘Sanga.’ ‘Sat’ means existence absolute, which is Brahman. ‘Sat’ is the essential nature of Brahman which is permanent in things that change, which is the only reality that upholds the world of appearance.

The glow and power of ‘Satsanga’, association with the wise, saints, Yogis, Sannyasins and Mahatmas is indescribable. Even a moment’s company is quite sufficient to overhaul the old vicious Samskaras of the worldly people. The magnetic aura, the spiritual vibration, and the powerful currents of developed adepts produce a tremendous influence on the minds of worldlings.

I have been injured

Because I have lost all purpose and happiness

These lines from Kehra Ram’s bhajan about Meerabai talk about her misery, her desperation and her pursuit of Lord Krishna, and how her life is devoid of happiness and meaning. Meerabai feels that everything is worthless without the light of the Lord.

With his immense devotion and determination coupled with ‘Bhakti Bhaav’, Kehra Ram stands out of the other hymn singers with his own style of singing.