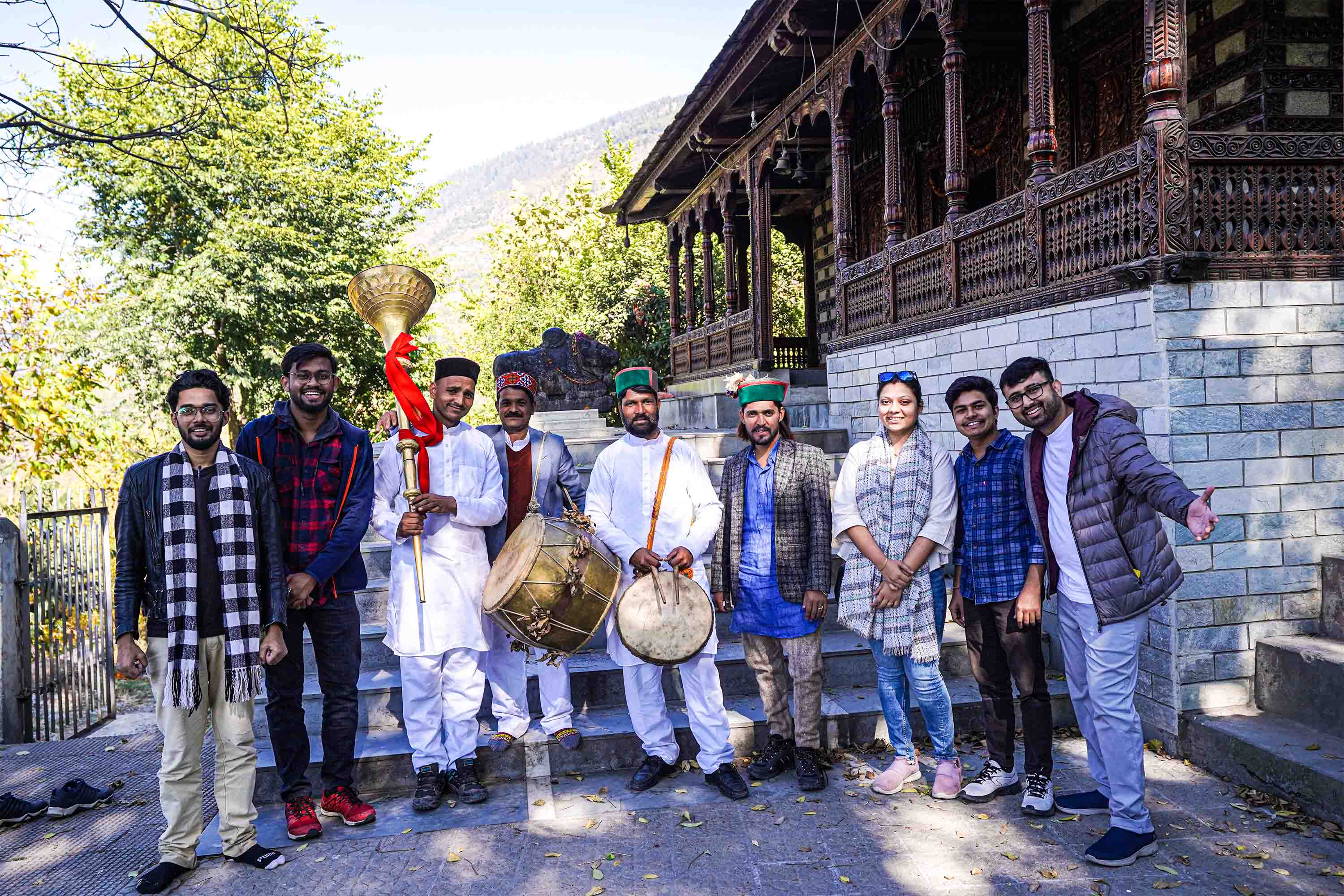 Wandering in Kullu in our search for the sweet and melodious folk groups, we discovered this young fellow who had set up his own small recording room for his passion for music. Yuvraj is merely 24 years old, he loves to write his own folk songs and compose them too. His songs are mostly about love in which he romanticises nature. For Yuvraj, music is his passion and the best way to connect with people. He wants to write good songs and make people happy with them.

Yuvraj has 3 other artists in his group like, Roshan Lal ji who is an extraordinary dholak player, Thirath Ram who plays the big round Nagada and Om Prakash ji who plays a folk instrument Karnal which looks like a long trumpet. The group has been together for almost a decade now, performing at different places in and around Himachal. They mostly play during various competitions held in Kullu and occasions like weddings. Each one the members are passionate about their folk music but due to less opportunity in this field, none of them follows it as full time. All the group members have other jobs which fulfil their hunger and make them survive in life

In spite of music being their passion, farming is every members’ primary source of income as they don’t get enough money to survive upon performances. All the group members belong to the Bajantri (instrumentalist) community of Darth village in Kullu, Himachal Pradesh. The group together displays a beautiful amalgamation of folk instruments of Kullu. They perform mostly at the Jagratas and wedding ceremonies. “We are considered very auspicious, so people call us for all the good occasions in the family to commence the functions.”, pointed out Yuvraj with a lovely smile on his face.

As per tradition, the group leads the procession of series of Gods which is carried before every marriage function in order to seek blessings of all the gods in the valley. We found a beautiful spot near an old temple commonly known as, Bijli Mahadev. As we completed our set up, upon the cue Yuvraj started off with his own composition, Jhurri teri yaad which is about a man who is missing his beloved in the valleys. The wordings of the songs goes like:

Where are you my beloved,

Where have you been all this while?

I am wondering where you are right now,

I miss you every time, all the time….

The group believes in saving their rich traditional culture for which they are ready to put all their efforts, especially when it comes to writing new folk songs. Yuvraj has a beautiful collection of folk songs which he has written while he was growing up. When you listen to this young man singing his own songs in his melodious voice with his group supporting with the same enthusiasm make one feel proud to see this generation doing their bit.

The instruments played in the groups are Karnal, Nagada and Dhol. Karnal is a long brass trumpet-like, it has to be set up before performing, initially, it is divided into 3 parts. Nagada and Karnal are drum instruments which one plays with hands or sticks. Together, the group wishes to play at various platforms across the country and globe with their tradition and music. It’s their dream to make Himachal feel proud with their new folk comes which they have been working on for so long.