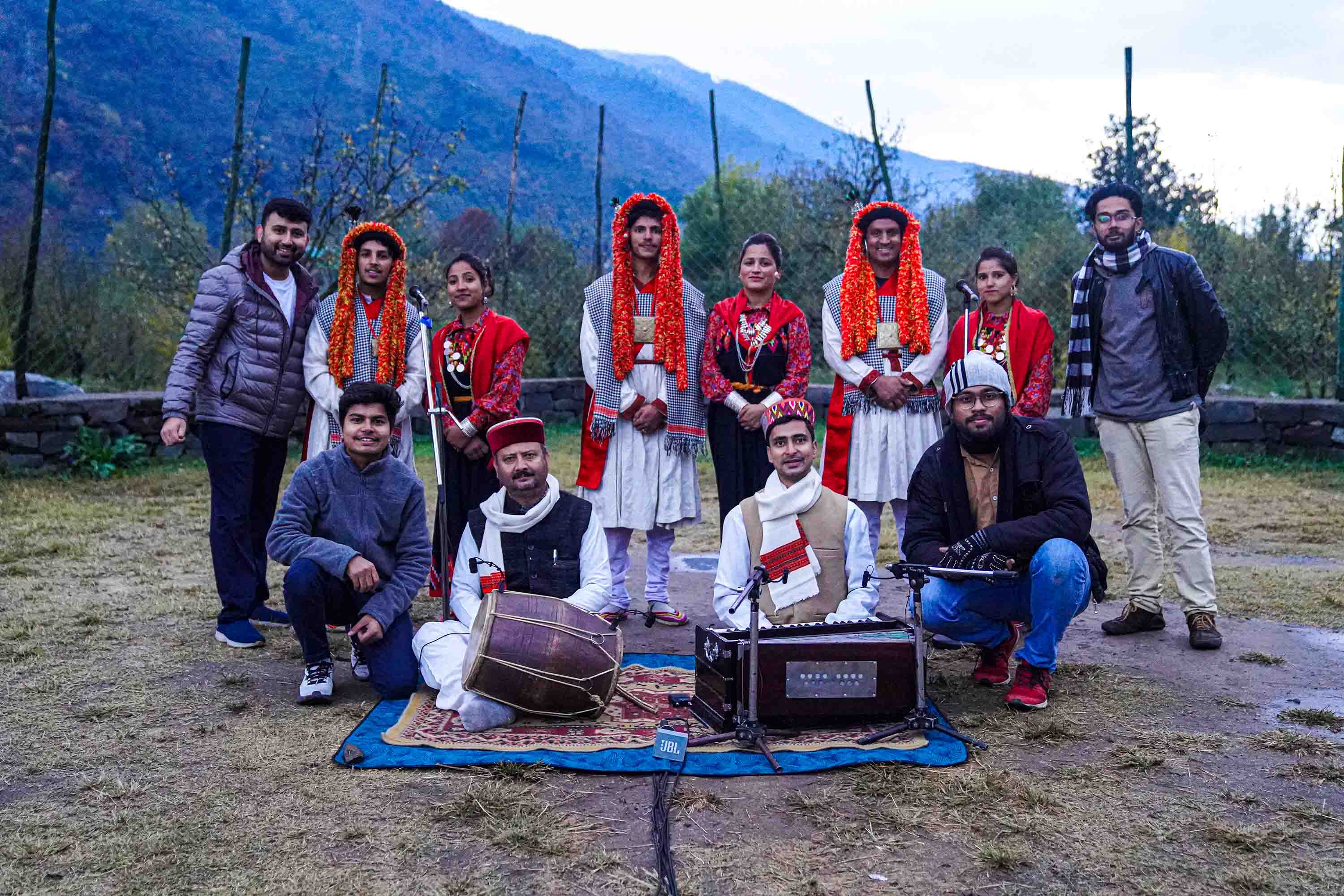 Himachal is home to so many tribes and their amazing folk music and dances. The people there wear beautiful crafted traditional attires and give dance performances to melodious music. It is extremely essential for the people of Himachal to preserve their folk forms as the youth there is drifting away from it. To maintain the melodious folk form in the region, Vidya Sagar had begun his quest to impart music knowledge to you under generation in his very early age. If one happens to visit Kullu, do enquire about the Sutradhar and visit them. Vidya Sagar with his team is evidently working hard with the youngsters to keep the Kulvi tradition alive by imparting knowledge how it should be. Vidya Sagar is 49 years old, born and brought up in Kullu. His father used to work in electricity boards and was very supportive of Vidya Sagar to pursue music which was his hobby as well. The inspiration of music has landed to Vidya Sagar from his father who passed on his skills of singing and playing tabla to his son. Vidya Sagar in today’s time is a great teacher and an artist himself. He takes singing classes in Kullu’s Sutradhar institute. For Vidya Sagar life is all and only about music, he has trained his son also into a professional Dholak and Tabla player.

Vidya Sagar, the leader and the Guru of the group has knowledge about Kuvi folk culture and traditions in abundance. He doesn’t restrict himself upon following only traditional Nati music, but also composes them on his own. There hasn’t been any state in India where Vidya Sagar has not performed with his melodious group. Apart from India they have travelled to countries abroad like Russia, Oman, etc. When asked what his dream is, with a faint smile he said, “This is my dream, teaching and performing, what else an artist could ask for more?”

Dussehra in Kullu is recognised on a global platform like UNESCO and for Vidya Sagar is like a ritual to prepare his children for Kullu mela and send them off to perform. His heart fills with pride when he sees his children performing on the representing him and winning accolades. The way his group functions is a perfect example of Guru-Shishya parampara, with respect and discipline.

The group enumerates all the qualities of a cultural folk group. They describe the lives of people in Kullu as social and religious, which is very interesting. They all have great faith in their God whom they move around during festivities in processions. They are very fond of festivals and feasts in which their music plays a very important part. During such festivals people prefer relishing the local delicacies while dancing to the rhythm of music played around them. The playing of instruments in an ensemble is of great importance in Kullu. All the instruments played by them compliment each other beautifully and thus are not very charming when played alone. Folk music of Kullu is a symbol of the collective experiences of its people, particularly those played during the ceremonies associated with the Devi- Devta.

For Vidya Sagar his group Dhol is one of the most significant instrument amongst others. It is made up of wood and copper shell wrapped in a goat or sheep’s leather called pura. These pura tied with cotton string or leather. Dhols depicts folk songs so gracefully, for instance:

so we may dance through the night.

The dhol dominates over other instruments whenever ‘naati’ (folk dance) is performed. One who plays these instruments is called a dholi. The group has wonderful singers who put life in the songs with their melodious voices. Twinkle, born in a family with a long line of musicians and has always felt that she was genetically gifted with her ability to learn and emanate the art through her remarkable vocals. She took birth in a village called Chanaugi, situated in Kullu district of Himachal Pradesh and currently resides in the small village of Bhakhal in Kullu. She initially went to Dhara primary school and then moved on to Middle School Neoli. Eventually, she ended up in Kullu for her high school education from Govind Girls Senior Secondary School and her Bachelor’s degree from Govind Degree College.

She began to sing in middle school as her teachers would encourage everybody to sing a song in front of the class and started gaining popularity in school for her talent, especially among music teachers. This instilled strength and confidence in her character and she started taking more and more opportunities to perform her craft in front of larger audiences. Her high school teacher, Mrs. Prem Latta eventually suggested her to go to Sutrdhar Kala Sangam in order to learn about music and vocals from Pt. Vidyasagar Sharma, who is an established and renowned music teacher in Kullu. Twinkle then moved on to Govind Degree College to get her bachelor’s degree in music. Twinkle has won numerous accolades in the field of music during her time in school and even beyond that. Along with her group from Sutrdhar Kala Sangam, she won a gold medal at a national level event for classical music in Raipur, in the year 2016.She believes that she can make a difference to the folk community of Himachal Pradesh through her vocals and also wants to start her own Youtube channel based on her own music as well as Hindi songs from Bollywood.