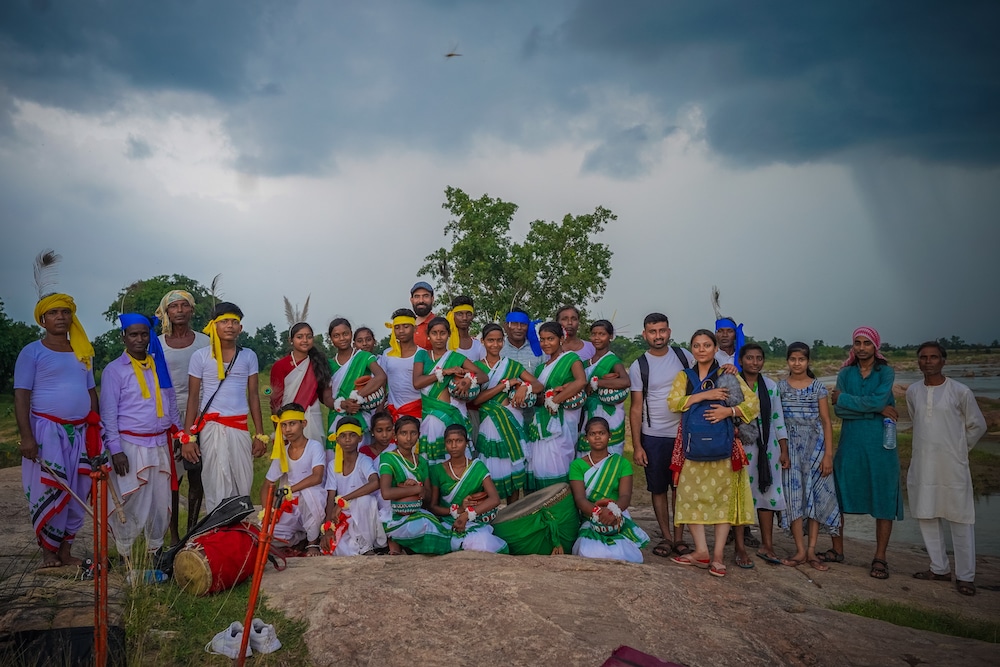 Songs of the River

After crossing the streams of river  Swarnrekha we reached the location which was on the banks of the river Swarnrejha. Across the river, we could clearly see the lush green land which was the state of West Bengal and the river acted as the boundary between the two states. With us this time we had one of a kind duo – Thakur Das (aged 40) and Ashtami (aged 15). They are the group leader of this group. Both are exceptionally graceful in their singing. Ashtami is a disciple of Thakur Das. Thakur Das writes songs focusing on creating awareness in today’s world regarding issues like – water pollution, air pollution, sacred mangroves disappearing, etc. The songs were written in order to focus on the current scenario and create awareness. At the point where Thakur Das writes and composes meanwhile Ashtami sings the songs in her melodious voice. He writes and sings the songs in Panchparganiya language which is spoken in the Ranchi district’s western part’s Bundu, Tamad, Silli, Raahe, Sonahatu Angada’s region which is also called Panchparganiya. Like many regions make one Panchparganiya, the language is also unified which is also called Panchparganiya. The songs are focused on creating awareness in the present scenario in the society. The folk tradition is followed about by all the castes in the region. The songs are composed out of narrations written by the artists.

Telling us about his land of treasures he started singing:

Nadi bachawa dada naala bachawa, nadi k paani suikh gele pran buchawa
Oh humans save the river, or else it will become to save lives

Thakur Das is a gentleman who knows only about his music and his family. He remembers about his childhood where his father used to stop him from singing but he never listened to it. He told us that the sad part that his father stopped him not because of the music but because he knew there is no way where he can earn his living out it. When we heard his song we were so glad that he never followed his father and continued to sing. The songs are so well written and have such a huge impact on whom so ever who listens to it. The tune and rhythm of both are set in just perfect tune. Thakur Das wants to educate children with his music and make them a better person in life. All he wishes to do is to spread good messages with his beautiful songs. He also dreams of a day where he would perform with all his children on a respectable stage. The dance form associated with it is also a treat to watch, as the dancers are in lovely clothes and accessories with perfect synchronized steps.