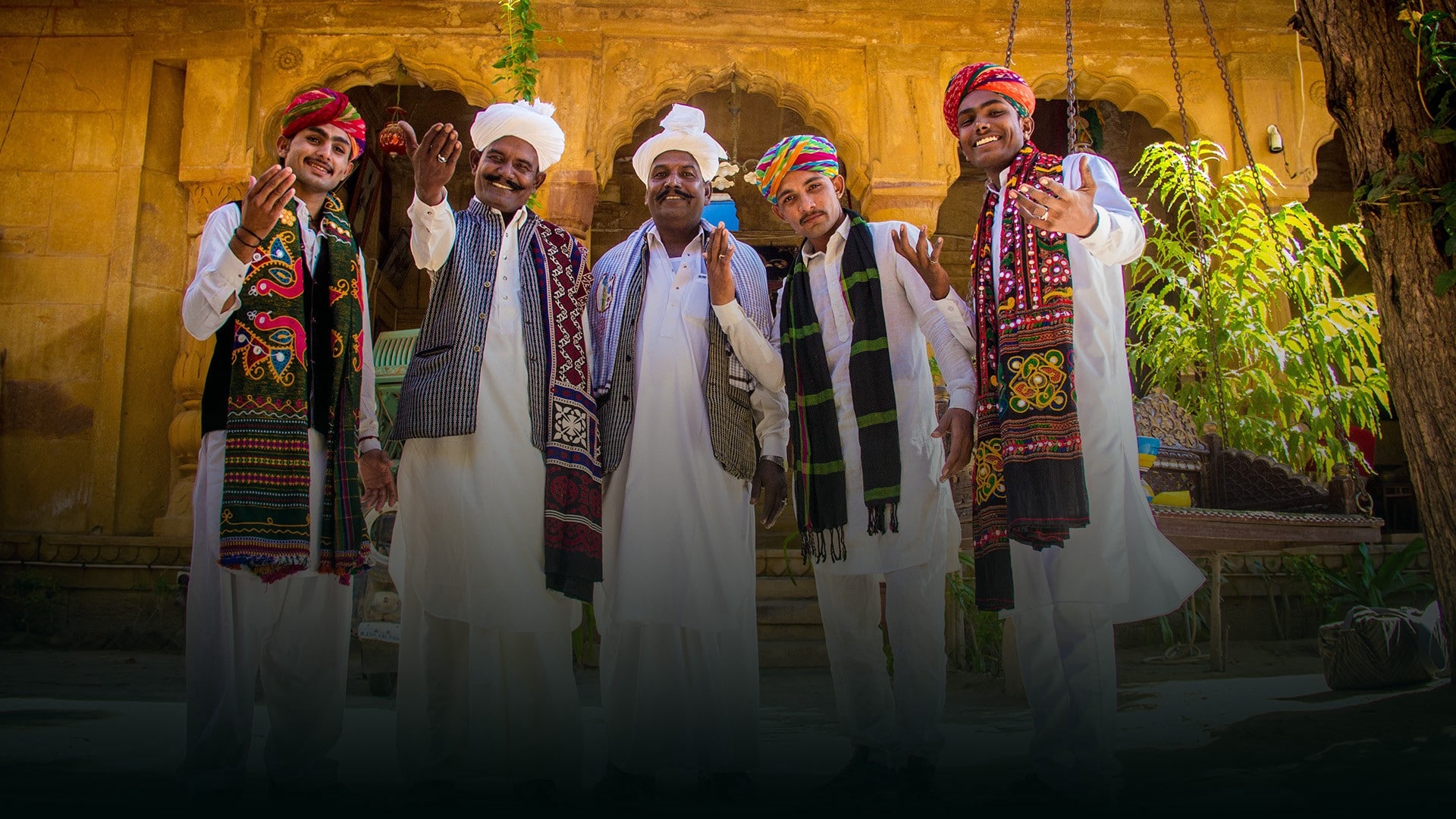 Words are less to describe the sheer poetry that is Sufism and the music which echoes as far as the sand dunes of Sam or Khuri or the ramparts of the majestic fort. Sakur Khan fondly likes to be known as a Sufi Singer and says that the colour white is symbolic of Sufism, as it is the colour of purity and the ‘ibaadat’ of Allah. Sufism is a phenomenon of mysticism, and Sakur Khan’s songs are truly mystic in nature. As per Sakur Khan, Sufism is his family tradition, and music is a divine worship.

Sakur Khan’s family has been into Sufi musical tradition since ages, and their songs comprise of songs which are a beautiful amalgamation of Hindu and Islamic traditions. Sakur Khan studied till standard 5th, and then took to music because of financial reasons. He comes from a rural area, prone to drought and describes his childhood as difficult due to the lack of basic facilities in his village. Most of Sakur Khan’s “Jajmaan” i.e. patrons are Muslims and royal families, and almost everyone in his family is trained in Sufi genre of music. Sakur Khan’s describes his family tradition as Sufi and says that Sufism is a divine medium of reaching Allah directly.

Sakur Khan’s powerful voice echoes in Nachana Haveli, as he loses himself in trance. He has performed all over India and in over 9 countries abroad including London, Turkey, Dubai and Iran. Apart from these, Sakur has also performed in Pakistan in 2006. Sakur Khan dreams of an ambitious future for the coming generations and wants his children and grandchildren to be educated. Sakur also teaches music to as many as 30 people who learn from him and is now their ‘Ustaad’. (master or teacher).

Bulle Shah is Sakur Khan’s favourite poet and he uses Bulle Shah’s poetry in his songs quite often.

A charkha, is a wooden instrument used to spin thread from cotton. An intentional pun is used here as “ruh” means cotton as well as “spirit”, in Hindustani language.

A Charkha spins the thread, but the spirit calls the name of Allah.

So, it doesn’t matter if I am famous as Bulle Shah unless I have the ‘ilm’ or the desire to worship Allah. (Bulle Shah addresses himself as he leaves his signature in this composition).

Sakur Khan wants to pursue music as long as possible and is financially dependent on music. When asked about the traditional costume which he wears, and the dominance of color white in his group’s attire, he says that Sufism believes in purity and love, and they are devoid of materialistic desires, therefore they wear white clothes, and instead of wearing colorful turbans as is seen in the Manganiyaar community, they wear turbans of red color, since red is a symbol of love.

His group’s music is as unique as it is timeless, as it combines the traditions and emotions from both Hinduism and Islam, music has no boundaries of caste, creed or religion, and Sakur Khan’s music is a perfect example of that. In one particular song, rendered from a poem by the famous Sufi Poet, Shah Latif, who composed mainly in the Sindhi language, a girl wishes to leave this material world and desires to become a ‘Jogan’, (female ascetic). In the entire song, she uses various metaphors for describing a Swami, yet retaining the Sindhi-Islamic flavour. It’s interesting, yet worth noting that most of the singers from these Manganiyaar communities are followers of Islam when it comes to religious worship, yet they arHindusus in their day-to-day life.

The swami carries a satchel (jhola), in which he keeps a utensil

When he asks for food.

He keeps walking and roaming till eternity.

(Swamis, in India, generally carry a satchel, and are dressed in simple clothes, they are devoid of material desires and live on “bhiksha”, on people’s generosity)

The swami usually carries a utensil which is known as ‘kista’ in the local language and lives on the food provided by the people which he carries in his ‘kista’. The most mesmerizing thing about this composition is that it’s composed in Raaga Malahari, which is an important Raaga in Hindustani Classical music and is associated with the atmosphere of rains. Yet, this is the beauty of folk music, that one raga can be used to evoke various emotions and to create a variety of moods. According to legend, raga Malhar is so powerful that when sung, it can induce rainfall. It is possible that the rainfall that the legends speak of is, in fact, metaphorical of the state of mind brought about by the recital of the raga.

Rarely does one comes to witness a beautiful palimpsest of different raagas, languages, and emotions together, and Sakur Khan’s powerful vocals enhance the poetic mood of these compositions. A staunch follower of the Sufi genre of music, Sakur Khan wants to retain this genre and wants to practice it till eternity. Sakur Khan concludes with this beautiful poem by Bulle Shah:

I don’t ask many questions, nor am I worthless
I am a lost lover (love for Allah)
Neither do I eat, nor do I drink
Neither am I alive, nor am I dead
I am intoxicated with the love, “ibaadat for allah”
Neither am I man, nor a woman
I am not a thief or rioter
I am not Allah or Bulla (the poet himself)
Neither am I Maula, nor am I Mohammed (Maula=Allah, Mohammed=Prophet Mohammed)