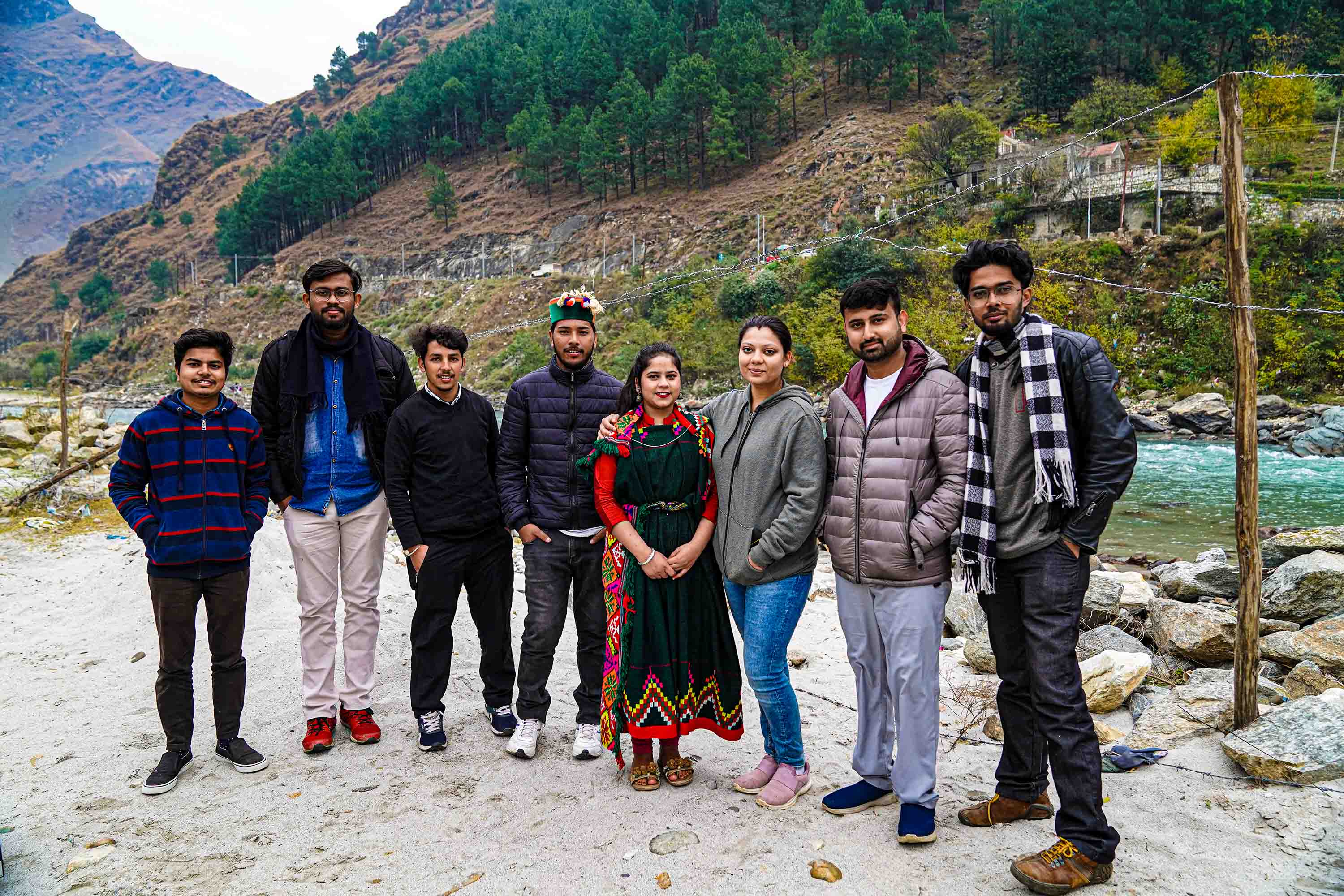 While searching for folk artists who need help, we came across a studio who recommended a girl who is in dire need of a platform. He told us that she is a wonderful folk singer but since she is young and has a lot of family responsibility thus never got a chance to help with her skill. She just wants a chance! We called up Shiwani and got to know that she works as a receptionist in the Kullu government hospital near Dushera park. She insisted upon a morning shoot time as she would be able to join once she gets done over with her shift at the hospital.

The next day she came over with her small group of two more members. It was not a usual sight for us to witness a group of three in Himachal. Most special thing about Shiwani’s group is that they perform all the Himachali folk songs but in a very conventional yet traditional way. They dress up like any other group but since they are extremely skilled yet new to this field they couldn’t afford more group members for dance. This situation made them change their way of presenting folk music to people. They use dholak and harmonium as instruments.

Other groups members include Surender Kumar, a young man, 20 years of age. He is an extremely talented singer and musician who is at the beginning of his career to begin with in the music industry. He clearly remembers his first performance when he was in 5th grade and ever since his love with music and passion began. At present Surender is learning Harmonium and Flute from Sutradhar Kala Sangam. He dreams of becoming an established singer and a music teacher. Whereas Guddu Ram is the right hand of the group, he began to learn music at the tender age of 10. He is well versed and skilled at playing Sitar, Harmonium and percussion instruments like, Dholak, Dhol, Nagada and Congo. Out of all these his favourite is Sitar.Born in a Sainj village near Tirthan, he gets his inspiration from his father and the local people of his village. Guddu has learnt from Sitar from his Prof Mohini Sharma. Apart from the folk he also likes to listen and humm at Bollywood music as well. Out of these three musicians Guddu likes to write and work on new compositions, with which he is able to make his family  survive. He wants to make his career in the music industry and take his folk traditions forward across the globe.

Shiwani’s voice is as beautiful as her heart, she sings with such dedication towards her love for music, it can be easily seen on her face. The advantage that this group has is the youthfulness of each member, they have a lot of potential for their growth and talent to become an established musician carrying the flag of their folk culture and traditions forward. All of them already have a keen interest in music ever since their early school days and their confidence is unshatterable. Thanks to the school performances that they have been giving from an early stage in their lives.

The group is working towards their career to a great extent with determination and experience mentorship from Sutradhar Kala Sangam in Kullu. Each of them have learned the details and fineness of classical and folk music thouthly from  Sutra dhar Kala Sangam. They have a good amount of exposure with conventional as well as modern instruments.

Shiwani, has won several accolades not just in the field of music but also as a strong contender in various beauty pageants that are organized in the region, makes for a strong leading figure in the group and one of the best young folk artists in the region.Shiwani along with Guddu Ram writes songs about the beauty of huge snow covered peaks in a poetic manner. Their songs are about the huge grandeur valleys and the mighty rivers flowing between them. In one of their songs they thank all the Gods for they bless the people around them and provide them with living resources. In one of her songs called “Thaara Kardu”, she also thanks the gods for her struggles that have shaped her personality and taught her the meaning of strength and fulfilment even in the midst of misfortune and setbacks. Such a mature approach toward creating her songs makes her music even more exciting and something we must all look forward to. The song “Thaara Kardu” is so melodious and the meaning is equally beautiful: