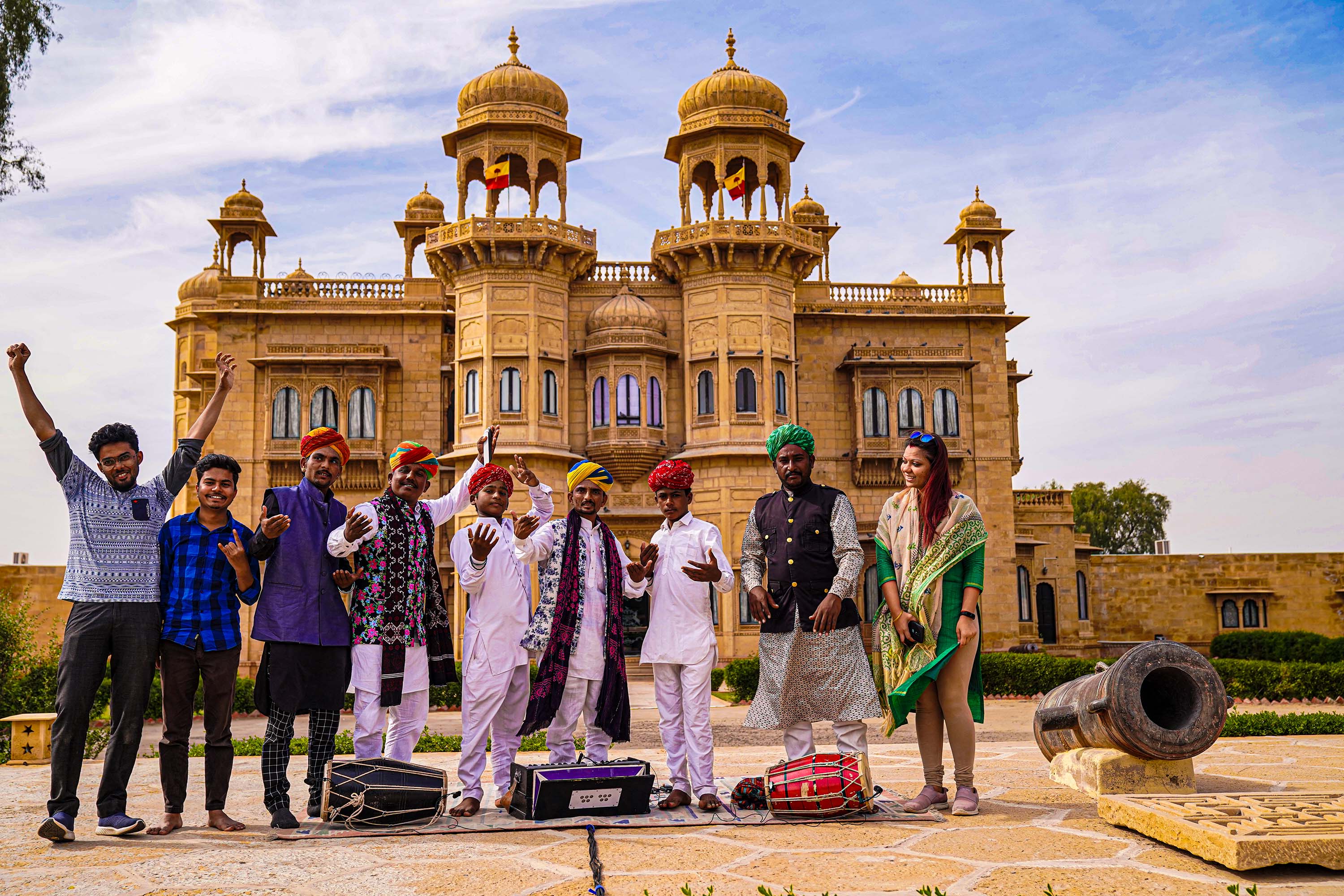 A troupe of folk musicians who belong to the Manganiyar community, Pokhran Manganiyar are quite popular in the Jaisalmer district of Rajasthan. Happe Khan steps up with his vocal ability as the lead singer of the group. He also has expertise in playing the traditional instrument called Harmonium. Along with masters of percussion instruments such as Dhol and Khartal, that are played by Ghulam, Sikander and Raees Khan, almost every individual in their group have had years of experience in performing their art and presenting it to the audiences.

Passion, they say is a great energizer. We are wired in such a way that many times passion and purpose comes together. Happe KhanKhan is a young folk music artiste. The 25-year-old is passionate and proud to be identified by this genre. His undying passion for Rajasthani folk music is a contrast to what people his age prefer.

Happe khan and others in his group are manganiyar. Muslims themselves, their patrons are largely Hindu  Rajputs. They are renowned as highly skilled folk musicians of the Thar desert. Their songs are passed on from generation to generation as a form of an oral history of the desert. In his own words,” The culture of Rajasthan has been recorded through songs. When we are playing folk music, we are telling stories, stories that speak to the human conditions, stories that tell us who we are, stories riddled with anecdotes of love with all its complexities and simplicities. These stories define us as a community. They help us relate to each other.” It is said that on occasion in the Rajput family is ever complete without a Manganiyar. Be it birth, marriage, family festivity, the manganiyars would help evoke the right mood with songs that have a flair of Rajasthan and many specially composed songs to praise the patron and his family.

Influenced by family traditions and his elders, Happe khan has been singing since he was a child. He formed his group six years ago. The six group members are from his family itself. They have adapted themselves to play all kinds of instruments. Harmonium, khartaal, Bhapang, Dholak find common use in their performances. Happe Khan plays the Harmonium which he learnt and developed an affinity towards while he was in school.

Like any other professional singer, he has a generous understanding of ragas. Khamaj Raga is immensely used in their music. He says that tradition calls for the beginning of every performance in khamaj raga. When asked about how he learns songs, old and new, his answer is simple. To them, he says, the need to write and then learn songs was never required. Music is so deeply ingrained in their lives that just as little as listening to their elders sing once or twice is enough for them to follow up. However, he feels that technology today has found purpose and use in all fields and as an aspiring artist he doesn’t shy away from deviating from the traditional methods of learning music and using tech and social media to his benefit. They appreciate the fact that technology has made it easy for them to expand their repertoire in folk music.

Besides singing the traditional old folk songs, this young artist has penned down a few songs of his own and composed rhythms and tunes for others. He claims that there are a few songs that only he can sing in his community. Reciting Shiv Tandav,  which is a Hindu hymn that describes God Shiva’s power and beauty, is one of his speciality. This is satisfying to observe that though they are Muslims, many of their songs are in praise of Hindu deities where the performer traditionally invokes the Gods and seek their blessing before the recital.

Happe khan envisions a bright future for his group. “ money is not an incentive, I want to take my traditions forward. We want people to see what we do and like it enough. That will truly be encouraging.” We can’t agree more on the fact that their culture is very rich but some people are clueless about it. This is the time to know deeply about Indian culture through different mediums that are sustainable. Through loving and showing pride in it, the world will come to know of it too.

Their community is known for musically talented and passionate individuals who have a desire to showcase their rich culture and create awareness about it in the outside world. Many are learned in the field of classical music and understand the intricacies that affect the structure of the songs that they play, including all the ragas that are involved in the composition of the melodies.

Young artists like Devu Khan and Shaukat Khan, with their incredible vocal ability, are also an important part of their clique and show an unforgettable display of their talents whenever they perform. Through their youthful drive and desire to create as well as inspire, these artists bring a disparate light to the otherwise highly experienced musicians of the group.

Despite the struggles of living in the rural regions of the Thar desert, these artists have done a brilliant job of getting their talents together in order to form a musical group that compliments each other. Their melodies are captivating and transpire through word of mouth as most of them haven’t had the privilege to get a college education and gain the required marketing skills but they wish to make an impact on their community and livelihoods through their art form.