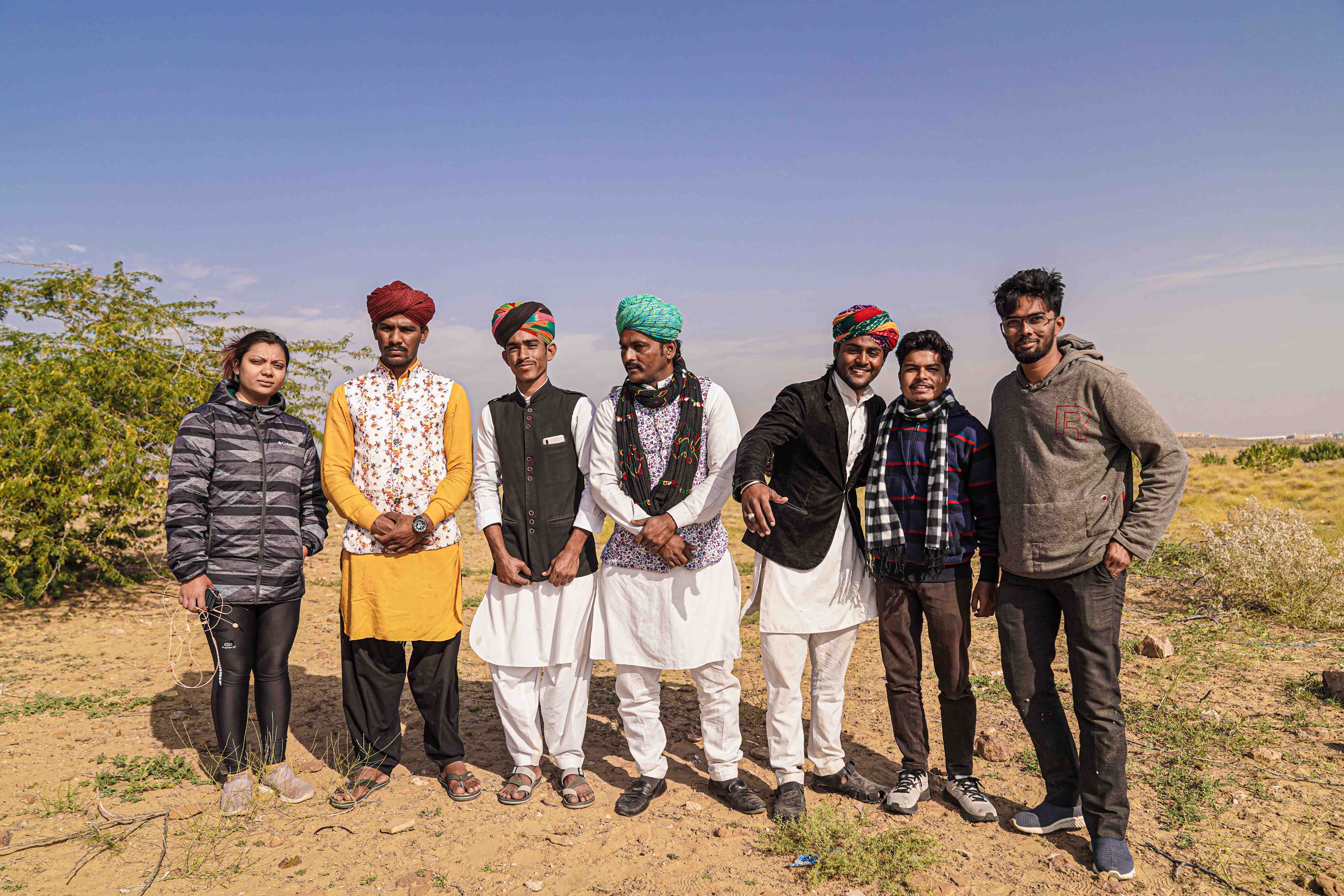 On hearing this song, one cannot resist but smell the air of Rajasthan:

( Let me enjoy the dance, let me go there)

This is the song of fun and dance and all those emotions that a young girl beholds. Those emotions when translated in the beautiful and distinguished voice of the legendary Pepe Khan, they strike a chord in the heart.

Pepe Khan, who belongs to Unda village of Jaisalmer district, is a part of the Manganiyar community. The whole community is mostly folk and Sufi musicians who have been engaging in these art forms for generations. The group has expertise in bringing to life old folklores and stories through a breath-taking display of traditional musical instruments such as Khartaal, Harmonium, and Dholak.

When it comes to studies he hasn’t attended school after class 7th but still remembers the age-old songs coming from generations just like that. He now feels that education is very important and therefore he made sure that his children are studying. He wants his children to study more than him and become a competent person in life such that they cannot be fooled. Apart from music he also drives auto in the city of Jaisalmer for some extra earnings.

He has performed at most of the places on both national and international levels from Dehli, Punjab, Haryana, Mumbai to the USA, Sydney, London, etc. The music is infinite, and the possibilities of his melodies are endless. The music itself is so vast that it cannot be confined to a textbook and standardized, as there are no set standards for learning music which is imbibed in his blood through generations.

Almost everyone in the group, as well as the whole community, begins learning the art of music at a very early stage in their lives. A lot of them are only children studying in primary classes in school. This shows how much importance is paid to grassroots development and how it helps in developing a certain level of mastery in their skills.

Pepe Khan himself plays the Dholak with great finesse. Along with the percussions using Khartaal by Khete Khan and Shaukat Khan, and the rugged yet beautiful voice of Sarvaan Khan with his harmonics, they prove to be one of the most talented groups of musicians in the state of Rajasthan. Apart from Rajasthani folk, the group also likes to sing Qawalis and Sufi songs which are sometimes adapted and modified from older versions of these songs. Their knowledge in the field of classical music also makes helps with their performances and improvisation of older folk melodies. They like to perform music played in various ragas and talas but they are most fond of playing the raga Bhairavi as they believe it has the most beautiful sounding tone.

They have performed not just in all districts of Rajasthan, but also done shows in multiple countries such as China and Korea. Even though the frequency of their performances has decreased in Udaipur, they believe that the art forms former prestige can be restored through the support of music enthusiasts and experts and are open to meeting, interacting and learning new ways of music composition from them.

Before he sings, he touches his ears, folds hands, and ask for forgiveness. In Islam, the religion he and other Manganihars follow, music — ‘ useless entertainment’ — is forbidden for it leads away from the path of spirituality, they say.

But he is a believer like others of his tribe and believes in the mystic power of music to reach God. Music, they have been told, creates arousal, and passion. Hearts should not be moved with desire. Stretching, raising, and softening the voice could lead to sins of passion.

Pepe Khan has travelled places for his music. He has performed all across the globe in various countries. He says, “I can’t name all of them in one go. But what’s the benefit? We still struggle. May God listen to our songs (prayers).”

He has been learning music from a very young age. He first learnt it from Ustad Baage Khan when he was a child. It is a lifelong journey, he says. It never ends. Pepe has studied till the seventh standard and could not pursue further studies. But, now he wants his children to study hard and also learn music knowing the condition of Indian tribal music he doesn’t want them to starve like himself. He feels that education will take his children ahead and would also help them take music all across. He also drives auto-rickshaw for a living since folk music is only a seasonal work.

“I sing while driving auto-rickshaw too. It entertains my passengers. Afterall, I have to take care of my family and money is a challenge through music.” He says.

But I cannot read my karmas)

Though it’s a romantic song he picks these lines to convey the irony of life. It is a difficult paradox. But music is all that we love. Hope someday our songs shall be heard.