By August 12, 2019Himachal Pradesh
No Comments 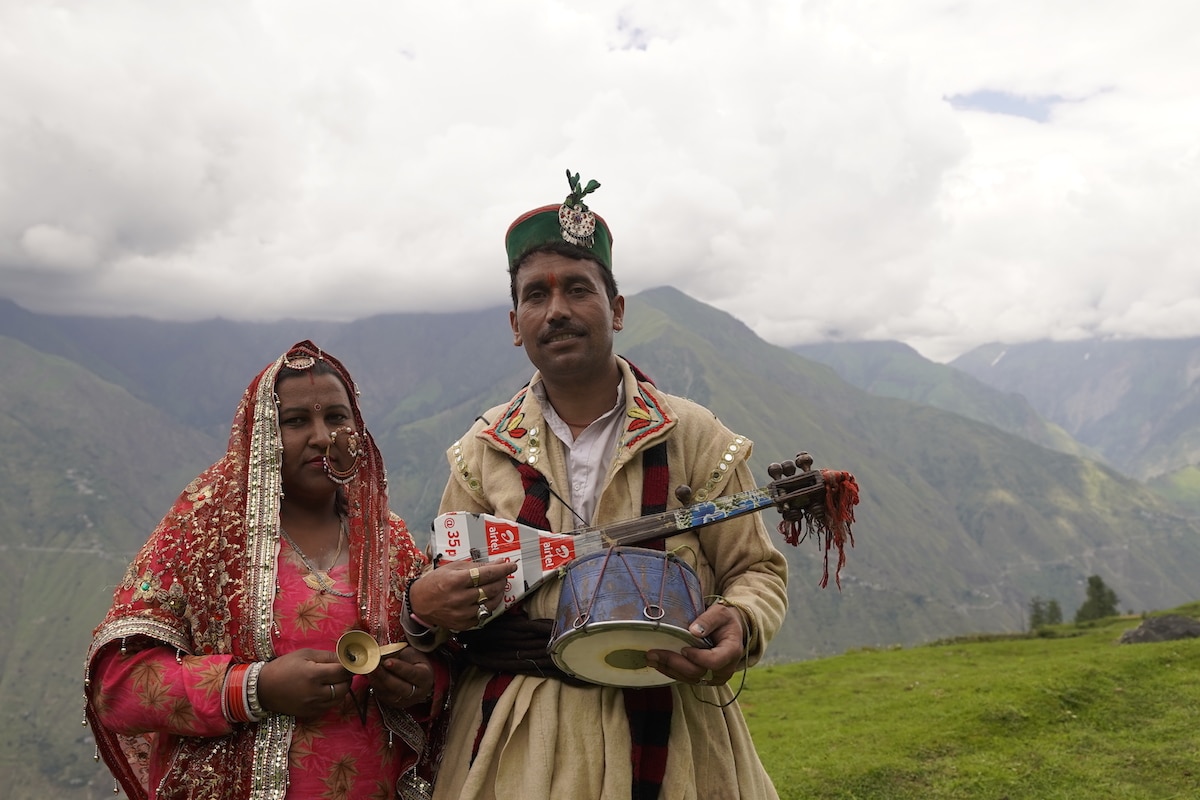 A Love Affair on Hills

Pawan Singh and Nirmala Ji belongs to a small village called Jawa in Chamba in Himachal Pradesh. They belong to the Gaddi community. Pawan’s parents as well as grandparents were singers and musicians and therefore Pawan was born in a musical atmosphere. It was unlikely for him to not pursue music. The family supported his musical career and wanted to make him a singing star. His interest in singing was further developed when he started participating in singing competition in school. Somehow in the midst of his career, he left singing and tried working other jobs like farming, animal husbandry and mason. He continued it for years and lost touch for music. But eventually eh return back to it. Since he lost touch to music, he forgot to play his khanjari and ruvana and it was a tough time for him to learn it again. He says that he didn’t lose hope. He kept on playing and singing till he eventually learned it. Today he is an able singer and plays his instruments very well. Pawan now sings and simultaneous plays ruvana, khanjari and ghungroo. He got married with Nirmala, who hails from Bharmour and taught her singing. Nirmala also goes to several villages with him and sings by his side.

The main source of income for the group is music. As passionate and driven he is for music, he doesn’t deny the fact that one is not able to completely pay his bills through music. He has worked for years in musica nd faced a lot of difficulties. Sometimes, they don’t get enough shows and there are months in which playing music or singing is strictly prohibited so they have to see other jobs. Pawan works as a mason and a farmer to get the work done and get money for his and his family’s livelihood. He likes to sing a variety of songs. Songs which are based on topics like nature, cultural lives of people. Festivals, life of people, Gods and goddesses,etc. His favourite songs are religious songs which are dedicated to Gods and Goddess. He considers himself as a devotee of Lord Shiva, just like most of the people of Himachal Pradesh. He talks about the importance of guru in singing. No one can learn without a guru. “Gru toh har cheez ke liye dharan karna padta hai aur maine taya ji se guru path sikha hai”

His father and grandfather was into this job of music and they wanted someone to pass on their torch too. As Pawan’s siblings don’t follow music and are working in different fields, he became the sole torch bearer and holds this responsibility on his shoulders to bring forward their heritage to the future generation. “Kaam khud sikha deta hai aadmi ko. Galat hoga pehle lekin dheere dheere sudhaar hoga”. It is clearly visible that it is difficult to play ruvana. It is even more difficult to play in synchronization with khanjari and singing. It comes only through practice. When we asked him what he feels about women pursuing a career in music. He said that it is completely fine for women to play instruments and sing. He doesn’t offer any resistance to it and no one else does, but it requires a lot of hard work and training since childhood. It is difficult for nirmala to sing because she doesn’t come from a musical background. She learned music only after they got married and it is difficult to get people practise to sing while performing daily chores. Plus if seen technically it is difficult to follow a music by women because musada gayan has been designed in a way in which firstly the men sings and the women follow. It can’t be vice versa s women have shrill voice. Moreover, it is difficult for women to stay out of their homes to sing during the night time and travel to villages as it could be unsafe.

Pawan was ready to teach us to learn pahari songs. He wanted to pass hsi torch. He has two daughters and a son. All of tehma re young and are studying.

Pawan jai is saddened by the fact that no one wants to pursue music and feels ashamed of pursuing it. He is very stressed about who will be learning music from him to pass on this rich tradition.

Generally he performs musada gayan for which he has to perform singing and playing music  overnight along with his wife. For this it required massive training and experience. They have to learn and bye heart each chapter and it is very important. They should also know the meaning of it. As they first sing the chapter completely and tell the masses the meaning of the song.

Bharmour is known as shiva bhumi which 4-5 hours away from chamba city. From bharmour, the beginning of manimahesh yatra begins. Pawan explains that living in bharmour is difficult. It is isolated from the world through mountains. There is a single road which reaches this place and afterwards the road ends. The place is not well connected. The climate is severe as well. People have to leave the place during winters as it snows a lot. People shift to places in chamba and kangra where most of them have different homes. During summers they come back again. As beautiful the way to bharmour from chamba is, it is extremely beautiful. We set up the cameras and other instrue,mnst on highlands which were at an altitude of 4500 feet. The place was near to the brahmani devi temple., we crossed bridges and alpine forest to reach this beautiful place. After setup we asked pawan ji to sing his first song. The first song he sang was shravan viyog which describes the ramayana tale when dashrath killed shravan while he was filling his pot to bring water for his blind parents and eventually dashrath git cursed from sharvan’s parents after they were heartbroken listening to the news of their son’s demise. The other song was a song depicting the cultural life of gaddi couple.