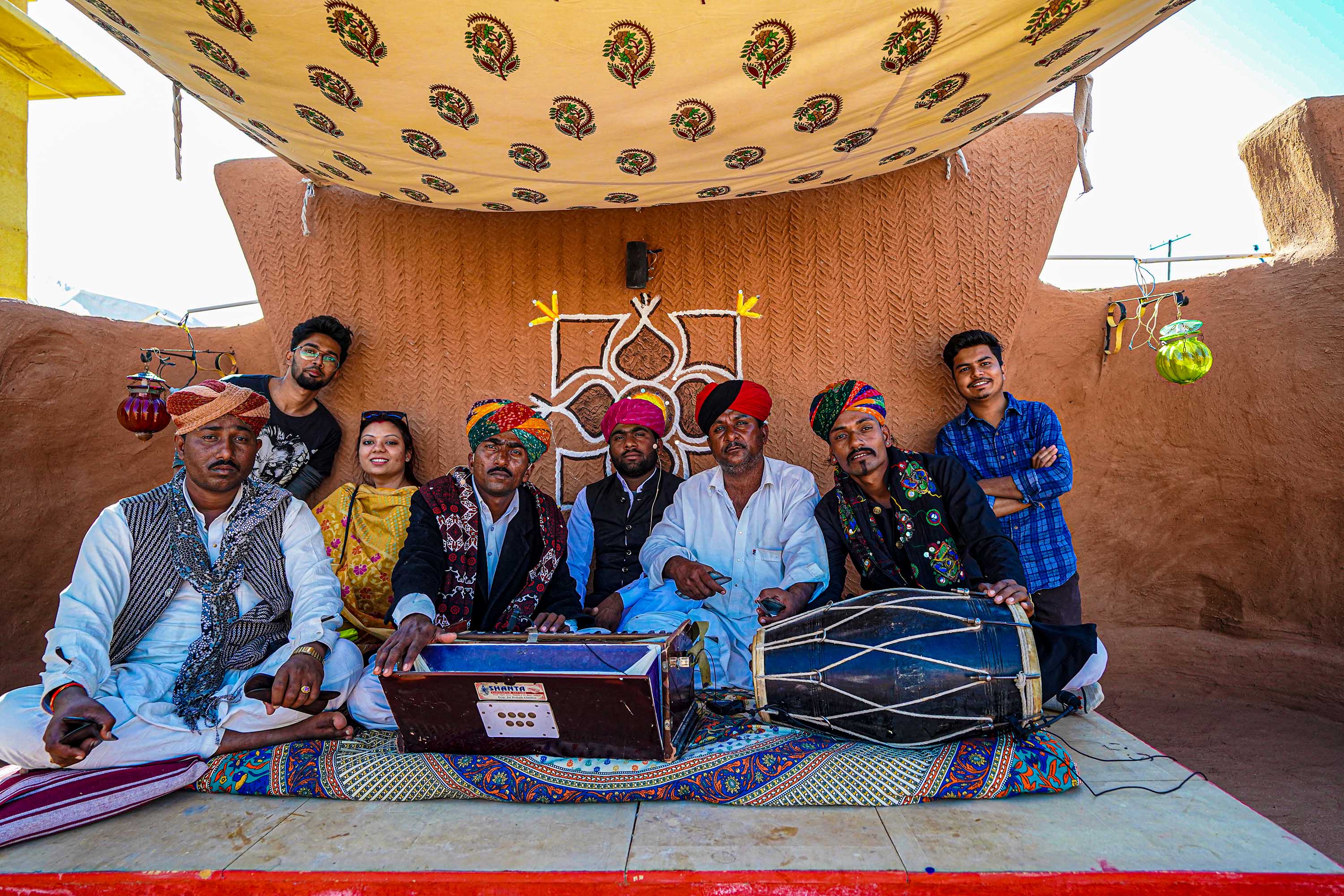 PAPPUKHAN.COM
Telling more about the song he mentions how the emotions and love of a young lady are beautifully portrayed in this folk piece. No wonder that artists, who render these beautiful lyrics day in and day out, get influenced by their spirit too. He says, “I see my children and I think that I am not able to give them all that they deserve. Folk musicians struggle for a living. This is a hard reality. I am sending them to school now, but I don’t know till when I would be able to take care of them. It makes me sad sometimes.”
He is the father of a young boy and a girl, with whom he tries to make the cultural heritage. He is very fond of singing traditional old songs about love, lovers, etc. With this he started his song;
(A mother shall give birth to a godly man)
Nito rahe kul mein baajni
(A strong man with principles)
Mate gumaaye noor
(Or no man at all)
Bhuvda kai re, disadli mein jaave re
(As beloved brother leaves for his labour work)
Are vaata jo vai thaare bhatuda
(Everyone asks when will he be back)
Pappu Khan is from Sam village in Jaisalmer, Rajasthan. He has been following the tradition of singing his folk from the very beginning. He says that after taking birth their parent’s hand over them with different instruments and thus they learn them without any formal training. Such is the music of Jaisalmer, embedded in its golden sand dunes and engraved in every stone of the majestic living fort-city.
Manganiyaar communities like that of Pappu Khan have kept their tradition alive through all these years through Guru-Shishya parampara, (teacher-disciple tradition). They have been entertaining the royal families for generations and their contribution to musical history is as vast as the Thar desert itself. The elegant use of poetry and numerous metaphors is what makes them different. Every nook and corner of Jaisalmer is filled with several Pappu Khan who is trying to carve a niche with their individual uniqueness.
His voice is jewelled with the gems of semi-classical tone. He sang for us another beautiful song to cover his melancholy with a big and warm smile. This was the song of welcome. Such is the warmth of the Manganiyaar tribes. Perhaps, such is the life of these artists who translate their pain into beautiful folk songs.
Ant bilaiyaan tola bichhaaiya
(I have made all the arrangements)
Mujhe varan haaye maaghi jeekhal ma
(And set the bed and dinner for you)
Magho dil jyo dost vadyo vajan
(But why haven’t you come yet, Oh my beloved)
Musa edi koi otan haaye makho jokhal ma
(He lied to me oh mother)
Dil jyo dost vadyo vajan
(Why hasn’t he returned)
Uth katara hale gaya ala naaiyo kar ja
(Everyone has arrived, even the cattle have arrived)
This beautiful song also talks about the warm welcoming culture of Rajasthan. Pappu Khan puts this in his melodious voice and sings other songs of royalty, bravery, love and pain. His songs touch a chord strongly but they reach where they are supposed to.
He also sings Sufi and hopes that his songs of prayers reach the one. Someday, he will shower his love and kindness upon him, he says with a great belief. He calls himself blessed to have performed all across the country. But when it comes to making a living, the struggle still exists. It is not easy. Money is an issue, an impediment. But the hope is that people will find them someday on the internet; that someone will notice them, and launch them. He will always sing. Whether it’ll give us anything or not. But you do a few things because you are born to do that. Music is that for us, Pappu says. e in the country in most of the major cities. He wishes to go out of the country and spread the invaluableness of his culture in the world. He wants to make his country proud. He dreams of taking his community and the talent in them to the world and uplift them.