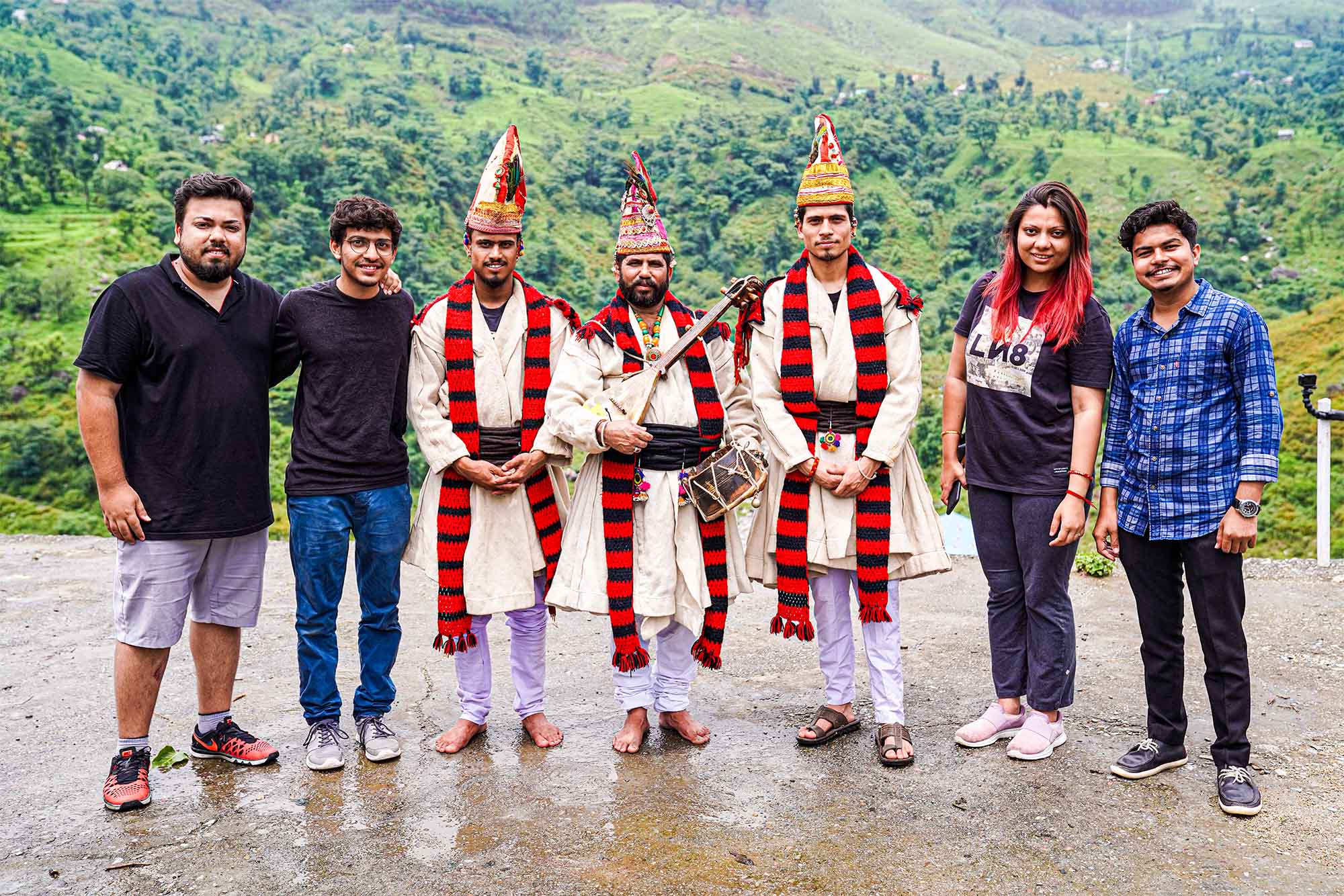 A Magician on Hills

While we were searching for more folk musicians in the streets of Dharamashala, we asked local people if they know anyone. Some few of them proclaimed the name of Kashmiri Lal. After a few hardships we finally travelled from Dharamshala to a small village called Jia. When we first heard Kashmiri Lal, we all were completely spellbound. He can surely run circles around any other pahari singer. Jia is yet another beautiful village in the midst of hills. We finally reached Kasmiri Lal’s home. We chit chatted with him to know him better in his front yard. Because of his singing, he is known as a very respectable person in the village. It is very strange that in his close family, he is the only one who sings professionally. He is the only music lover in the family who sees music as a source of income. When he was 9 years old, he saw a spark for music in himself and developed an interest in it. And after that only he started singing and dancing. His guru Unnu Puran Ji hails from Chamba and taught him to play the ruvana and singing. He was born in Bharmour, a village in Chamba. His parents were labourers and had no interest in music. But while studying, Kashmiri Lal developed an interest in music and started learning it.

“Himachali music is not groundless, each song has a story behind it”.

Kashmiri further explains that each song has a strong emotion behind it and has a meaning associated with it.

“People, nowadays, make music out of anything arbitrarily…”

Kashmiri doesn’t like the direction where music is going and particularly worried about Pahadi music which is not followed by many. A reticent, by what he appears to us, Kashmiri Lal looks very cool minded, calm and collected. He looks very composed, albeit gives a terrific performance. He likes to sing different style of singing as well, let it be Kangra, Mandi or Chamba style. He understands the three styles profoundly as he has performed in the three areas. He says that he has now learned to sing punjabi songs as well as people demand him.

He has youtube channel and is quite famous in it which is why MTV featured him on their channel. He doesn’t have ego regarding the same and believes in humility.

Kashmiri Lal has been singing for 35 years and has gathered a lot of experience. Strong voice. Sweetness, fragrance of folk can be felt when he sings. He is also an avid writer and he sings the songs what he has written. He likes to sing religious songs very much. Most of the songs are dedicated to Lord Shiva. Earlier he used to sing with her wife just like any other Gaddi couple singer but due to some personal reason his wife stopped singing and he joined a group of folk singers and musicians to sing with. He used to sing along with the group and visited a lot of cities like Delhi and Chandigarh and performed there. Kasmiri Lal built his new home completely by his career on music and now he lives his life comfortably. But after singing with the group for almost 8 years he left the group. He found a new way to stay connected with music by forming a group with his nephews. Music is something which he can’t escape and he doesn’t feel like doing any other work except for playing instruments and music, so he started a new group himself. He taught his nephews and is a constant source of inspiration for both of them. He incepted this interest for culture of Himachal and folk music in their minds.

During the shoot we were worried how will it happen as it was drizzling and their wasn’t a suitable shaded area which could be used for shoots. Eventually after much strolling throughout locally, we found a small temple where we decided to shoot them. Kashmiri Lal came with his nephews Pawan and Sanjeev, dressed in traditional Gaddi costume. In the midst of the river flowing through the valley, hills touching the sky and clouds somehow penetrating through the snowy mountains was a glimpse of a lifetime. Plus 3 musicians dancing and completely lost in music with such a beautiful landscape was an eye candy.

Cutting off our desperation, Kashmiri Lal sang the first song Mahadeva. In this song, there is a vivid description of Mahadeva and his attributes. This is followed by miracles and creations of Lord Shiva. How beautifully he created the stars and the moon. He lives in his heavenly abode in Mount kailash and wears a serpenta round his neck. He takes care of his devotees and we all bow our heads before him.

The second song was completely different from the first one. It is called “Kaisa laga Goriye”. It is a romantic song depicting the love between a couple. In this song, the young man asks his lover how do you feel living in the mountains of Himachal. The song depicts how virtuous the people of Himachal are. the song also talks about what are the difficulties faced by a couple when they decided to away and get married. The lady is not ready to elope and leave her family away but her lover serenades her and asks her to come with her else they will never be able to meet again.

Kashmiri Lal explains that he likes to visit places and give performances there. He has

Given performances in Delhi, Mumbai, Chandigarh and other major cities in India. He has visited nearly all districts in Himachal Pradesh. He has participated in many governmental and non governmental programmes.

This is his motive of living his life out loud. He was upset about how once a network channel came and recorded him and made a video out of him. They proclaimed that the money generated with it will be given to him. But after the recording, the people haven’t contacted him and didn’t connect to him in any way. He says that now he doesn’t trust people and emphasizes on the need to generate awareness among folk musicians.