Folk from the Foothills Sharan lives in Pavatoli, Ranchi. Till 2009, when he retired, he worked at the local AG office as an accountant. Sharan is one of those rare individuals from Jharkhand who has spent a lifetime not only to learn a local tribal language called Kuduk but also preserve it through music and literature. Sharan’s love for local tribal music began in an unusual way. Growing up in Laputhana he recalls how every evening the sounds of local singers singing and dancing would come from the nearby akhara (playground). As at that time it was not thought respectful to participate in such music and dance activities, Sharan would only listen and try to learn the songs himself. When he passed his 10th class exams, he one day approached his father and asked him permission to attend those evening gatherings. He promised that participating in the musical programmes would not affect his studies. His father agreed, and so began the musical education of Sharan. As he went to college for his MA, LLB he met several students from other districts and tribal areas proudly speaking in their local dialect. It is then that he realised that although he came from a region of Jharkhand that spoke Kuduk, he himself did not know it. He decided to study the language, so much so that now he is known as a scholar, probably the only one, who converses and teaches the language, writes poetry and is trying to preserve the old and traditional Kuduk songs by writing them down. He also goes to schools regularly to teach these traditional songs to students and has taken them for shows across the state.

The group has wonderful versatile members for whom music is passion and they shall follow it to their grave. Saranrau has members like Mangilal Horu, Baldev Rau, Jetu Rau. They all belong from a small village in Ranchi called Pavatoli. The group has been preforming since a long time together now. They all have been learning and following music from their childhood. They are extra ordinary artists who put in efforts at every performance like it is their last. They have performed almost everywhere on the national group but together as a group they had never represented their tradition and culture on the international platform. They all wish to travel the globe and spread the message that their beautiful heritage songs have to give. They are very happy as a group and for them as far as they have music in their lives they don’t need anything else. The group is being directed by the Sharan, he is a well-known artist in all over the Jharkhand and is being recognized by the Govt of Jharkhand also. They play a very important role in preservations of the art form. 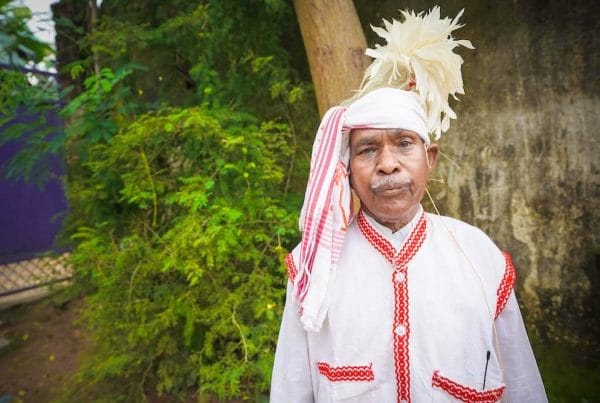