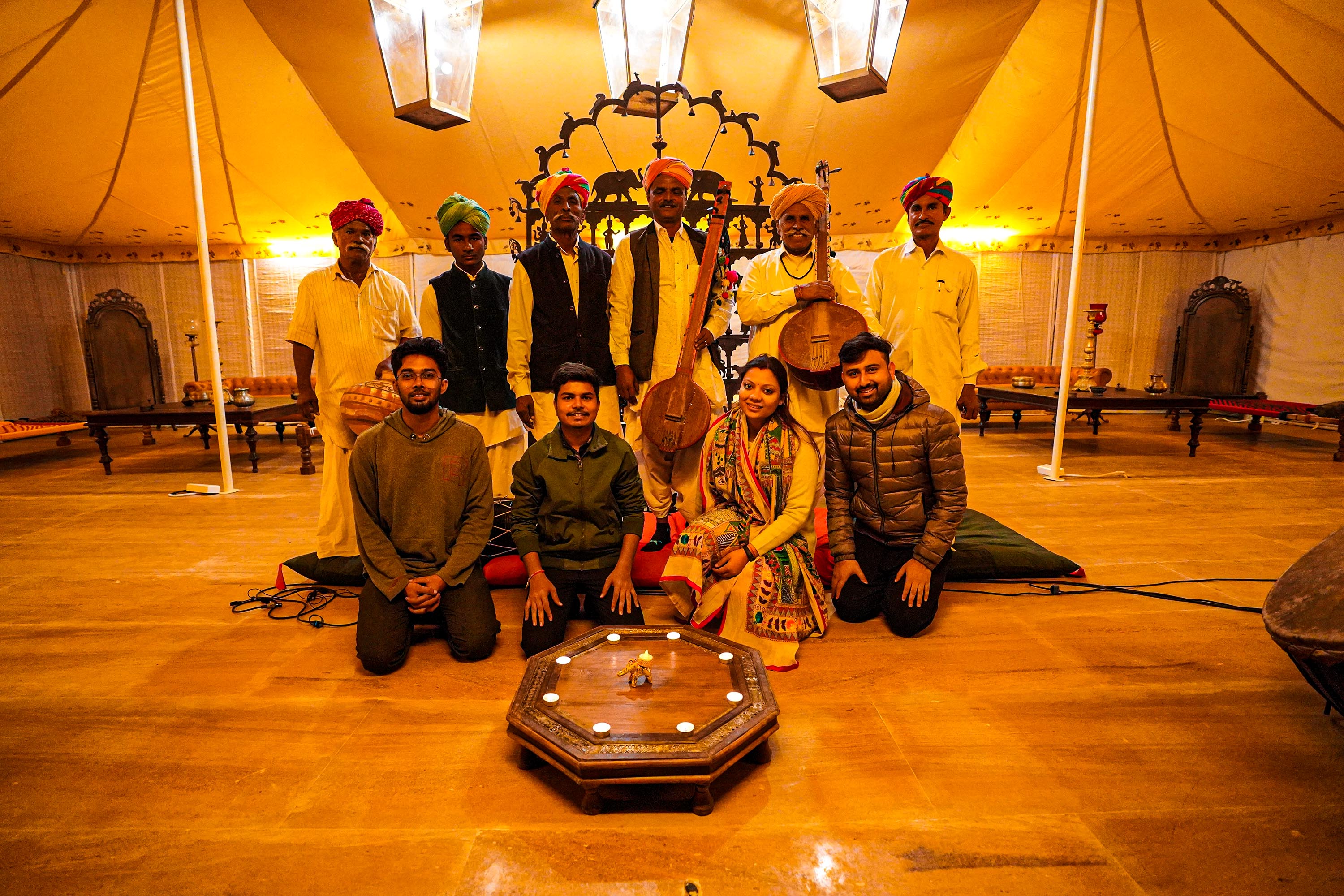 DEVRAMFOLKGROUP.COM
Bhagya bhala jana satguru mileya padya samand mon sheer
(We were lucky to meet Kabir Das as he is a sea of knowledge)
Hans hoye chugli ji re naam amolakh heera gun gayi le
(And we imbibed his knowledge like a swan swallows pearls)
Harira gun gaile jab lakh sukh shareer
(Till the time our body is fit and fine, till then we should take God’s name)
Peechhe ghano pachhtais panjare me wapela peed
(Later on, one will regret when the time has gone and there is nothing left in hand)
The artist, Dev Ram, fondly known as Devu, belongs to the famous Manganiyar community of Rajasthan. Manganiyars are Muslim communities in Sindh and Rajasthan areas and are famous for their classical folk music. They are the groups of hereditary professional musicians, whose music has been supported by wealthy landlords and aristocrats for generations. In 1978, Jodhpur-based musician Komal Kothari provided the Manganiars with institutional support, allowing them to sing outside the state for the first time. Currently, several Manganiar groups tour internationally. Dev Ram(49) has been in Jaisalmer ever since he was 20 and members of his community were have been singers in the royal court since centuries. Their music genre mainly comprises of Bhajans and Sufi songs, which are based on verses composed by various mystics like Meerabai and Kabir.
Played on simple instruments like “Tandura” (a five-stringed instrument resembling Veena) and Harmonium, Dev Ram’s songs speak about humanity and love. Most of these songs are composed in “Chautaal” or a 4 beat cycle. According to Bagge Khan, they experiment with various ragas like “Bhairavi”, “Surth”, “Jog” without losing out on the essence and spirit of the song. As Dev Ram quotes the famous poet Bulle Shah “Love is of two types, one is the unending love for Allah and one is the love which we share with each other”. And this love can be best expressed through music, as Shakespeare said: “If music is the food for love, Play on”.
Taking spirituality to another level, Dev Ram lovingly known as Devu is ground to earth person with a mesmerizing voice. His life is as simple as he is, the only thing he knows is to sing bhajans which he has been singing since he was an eight-year-old kid. He is carrying forward the generation-old legacy with such dedication and faith in his heart for the beloved Almighty. He states that while he sings his bhajans he gets connected to the Almighty and through that he has realized that there is just one Being and each one us constitutes it. He believes in the theory of One Soul – One Universe. Dev Ram has learned from his father who likes him used to sing bhajans just like his previous generations. During the process of learning bhajans, he learnt to play Tandoora which adds beauty to his voice. Tandoora in looks resembles Veena as it sounds like it and has five strings. It is played with equipment which is a ring-like structure known as Nakhli (worn in right hand’s index finger). Hearing Dev Ram takes you to a phase where you feel lost in the moment and could connect with your innersole.
Dev Ram belongs from Meherwal caste, the people of this caste are have been indulged in performing bhajans from the very beginning of their inception. From his ancestors to the youngest child of his family are all fabulous folk musicians. None of the musicians in his family have taken training or formally learned about music, music and its sense comes naturally to them. Dev Ram has performed in more than 30 countries but his most favourite is Paris which organised his first-ever international performance. For him, city, time, people or any other thing doesn’t cause any difference in his performance. According to Dev Ram, a person who has well depth and knowledge about music is the most learned person as he has a way to communicate with his inner self and with Almighty.
So if one meets this legendary bhajan singer, he or she will figure out that this man is all about music and Almighty. Dev Ram and his group are as old as his learning in music. The group consists of a small five number of people who have different and meaningful roles to be carried out. In the group, we have a main vocalist Dev Ram on Tandoora, 2 backing vocals with Manjira, 1 musician on Dholak and one on Harmonium. Each of these musicians is amazing performers who together take the group forward in achieving its objective of transcending from the crowd to focus on oneself. They all are Manganiyars from Meghwal caste, which has a background history of folk musicians singing bhajans written by Kabir, Meera, etc.
All these folk musicians have learned music just by listening from their fathers-grand fathers and yet they are so perfect at what they do. All they wish to do is to collaborate and play music with musicians who have learned music as formal education and that is their dream. The group is all about spiritual indulgence and want to remain the same for their entire life. They follow the path of peace and kindness. Their wish is to construct a training institute for the next generation where they could guide and teach children about their culture and tradition with formal education. They would like the Government to recognize them as an authority such that the trainees who come from faraway lands could trust them more and feel their creditability. The performances by these groups are so wonderful that one feels like listening to them throughout.