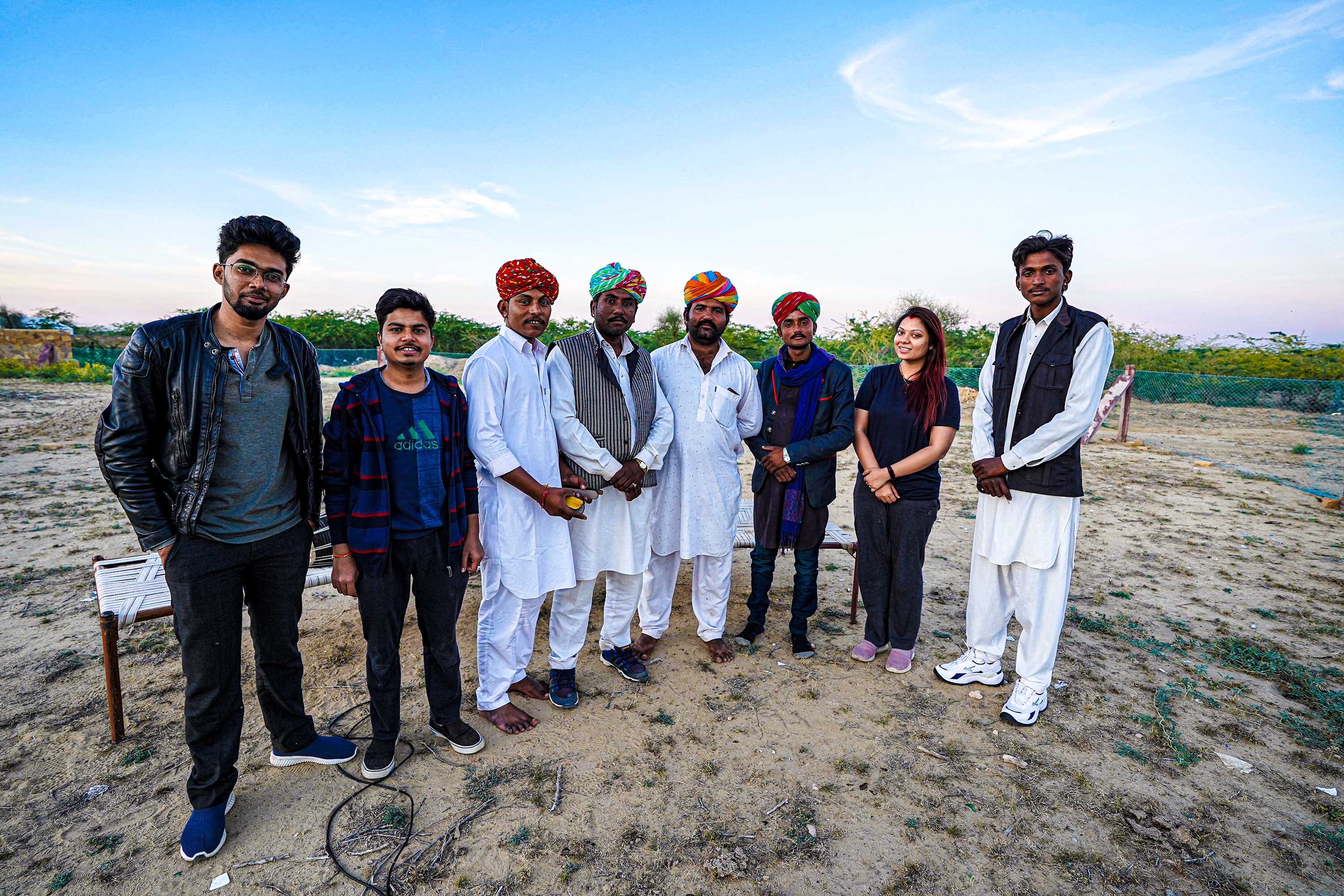 Drenched in the Sun of Jaisalmer’s golden city Chote Khan and his group sat down with their instruments to play the tunes of their music. For them, music is their lifeline. The group leader Chote Khan is a modest person who believes in hard work and disciplined life. He is someone who had been acquainted with music since he was a four-year-old kid. He says that he never sat down with anyone particularly to learn music, whatever he knows till date is all because of his father and brother who used to sing every day.

Talking about the music and traditional folk, he says that he sings songs in all kinds of Ragas like Khamaj, Bhairavi, Malhaar etc. Amongst these, his favourite is Khamaj in which he sings all the happy occasion songs. Chote says that they sing all kind of songs, for all the occasions they have traditional folk songs, right from birth to death. They are known for singing songs for all the auspicious occasions like childbirth, marriage, housewarming, etc. Since they are considered auspicious by their royal patronage, they are being called before every such occasion. They tell with pride that no happy occasion starts without their presence and performance.

When asked about the group’s future, Chote thinks of his kids and says with a smile, “ bachche hain bhavishya, inhe hi seekha padha rahe hain ab to sab inke haath mein hain, barbaad karein ya abaad karein (these children are the future of our traditional heritage and we are doing our duty by keeping it alive through teaching these children, now everything is in their hands to save or to destroy.).” He told that the children in his family have very much keen interest in their traditional folk music but he makes sure that they are also studying with sincerity. He recalls his time of life when he was a child and left his studies for the sake of focusing on only music. He feels that he should have completed his studies at least till class 10th, then he wouldn’t have to face unpleasant situations in his life and thus he will put in all the efforts to make his literate.

Chote Khan and his group’s music speak for themselves. They then sit together to perform, binds the atmosphere with a magical aura that mesmerizes the audience. The group sings all kind of songs, especially the one which are original authentic folk songs. The group is known for singing songs which are very rare to be heard and thus there are few songs that only they sing and no one knows such songs. The group is one such group of Rajasthan Manganiyaar community that has a treasure of age-old traditional folklore. They are trying to pass on this traditional heritage to their next generation and have all their faith in them that they shall carry forward with them to give to their next generation.

This group is all about passing on the fire of traditional heritage from one generation to another, which has actually become an exercise drill to make it survive anyhow. The new generation in their group is also very serious when it comes to learning and the old traditional folk songs. They say that it is easier for them to learn them with their studies as they have interest in both of them. They, just like their elders have dreams of taking forward the legacy of their forefathers to a wider audience and global platform. They want the world to know Rajasthan because of them and want to become an epitome of the great music of Rajasthan in the world.

The seasoned artists in the group are responsible for the teaching and guidance of the younger artists present in the group. The group sings mostly authentic original songs of their traditional heritage which has been passed on from their forefathers to them which each generation. The group performs at various occasions like childbirth, wedding, house warming, etc. at their patronages’ houses. The group earns their living out of the live performances they give at various different places. Apart from the music they literally don’t have any means through which they can earn.

These group of artists don’t dream of going to Bollywood and collecting fame, rather they and the world to know Rajasthan and their singing is known by their music. They want to make their country proud and carry forward their legacy from one generation to another. For them all they know is music and they can never get apart from it and thus for them, it is not just music it is their way of living their lives.