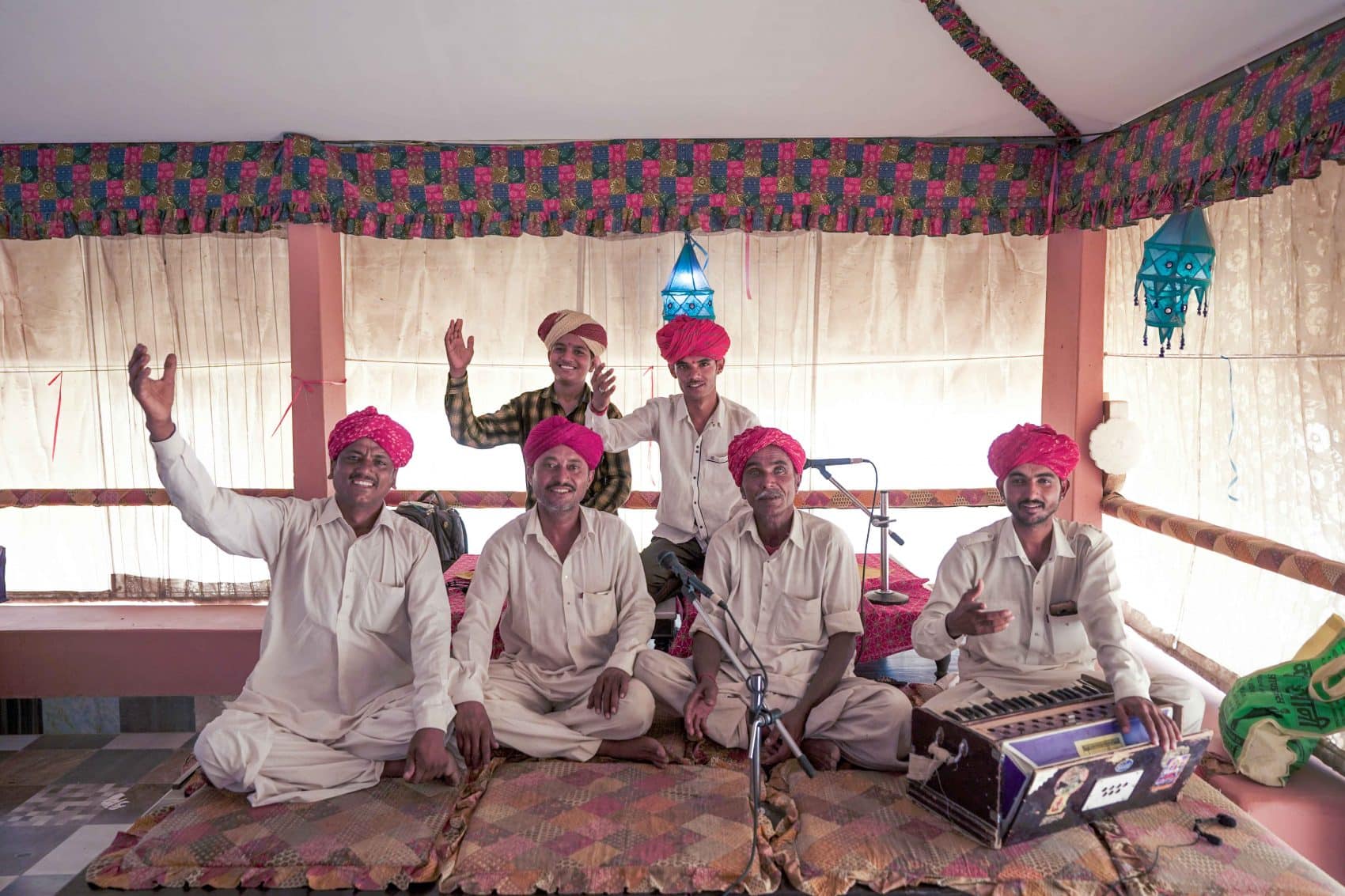 THE MUSIC INGRAINED IN THE LIFE OF RAJASTHAN

The vibrancy of Rajasthan is never completely discovered until you immerse yourself in its centuries-old folk music. Of the different communities that are involved in the practice of taking the heritage of folk music forward, the Meghwals find a special mention for popularizing religious folk songs throughout the country. Every piece of their music resembles and respects the essence of the desert land. Our session with Chagna Ram confirmed this fact.

Chagna Ram is from Hadwa, a village 75 km from Barmer. People in the harsh scantily-populated desert areas of Western Rajasthan have very little leisure for merry-making. For Chagna Ram and his group members, music is a respite, a means of making life more pleasant. They are professional performers and being from Meghwal families, their skills are handed down from generation to generation. Chagna Ram cultivated a desire to learn music after listening to his father and elder brother sing at events and functions. His elder brother was well known in the music circuit in and outside Rajasthan. A matka player, he had performed in Holland apart from entertaining the royal patrons in important cities of Rajasthan. Inspired, Chagna Ram too began his journey in the field of music.

Today his group consisting of 6 members, some of whom are from different communities. They sing devotional as well as festive songs. Songs by the saint-poets like Kabir and Meerabai are part of the folk repertoire. They are sung all night during special occasions (all night soirees spent singing devotional songs) which are held as thanksgiving to a particular deity. The resonant singing of the Rajasthani folk is accompanied by music from simple instruments like the Matka, dholki, tandoora (a five-stringed instrument), khartaal, bhapang and morchang that usually give a beat or a drone to offset the poetry. Together they have performed in Jaipur, Kota and other areas near their village. Besides they have been able to cultivate new audiences in various other Indian states like Punjab, Chandigarh, Uttarakhand, Delhi, Dehradun, Maharashtra. Fairs and festivals bring an even greater riot of colour and music into their lives. They also perform at events organized by Rajasthan Tourism.

Although music comes naturally to these Meghwals of Western Rajasthan, it cannot be stressed enough that Indian Folk music is filled with complexity and to truly master a skill one requires many years of study and discipline. In order to understand the fundamental techniques and feel their resonance with oneself, the teacher to student (guru- shishya) relationship is of paramount importance. Becoming immersed in raga theory and practice, a student learns primarily through oral means by listening and learning the tradition passed down from his or her guru. Chagna Ram gives credit of his knowledge to his guru Taga Ram. Be it accompanying his guru to singing events or helping him build his ashram, all the stories and memories from those days are still fresh in his mind. He expressed astonishment and delight when told about Taga Ram’s journey with Anahad Foundation.

All the skills and style that he acquired from his guru now enables him to create beautifully balanced exhibitions of ragas. Raga, literally interpreted as “that which colours the mind,” is the fundamental structure within Indian Folk Music. The composition is the face of the raga, defining its essence by bringing together all of its movements, parts and subtleties. But when is a particular raag used? Chagna Ram explains that a specific raag kind is used according to the time of the day because the power of the raga composition lies in its ability to evoke emotion that captivates listeners. Hence, he adds, there are two sets of ragas, the morning and the evening, each divided by the effects they have on the human senses.

On the surface, the Rajasthani folk music circle seems peaceful enough, a perfect blend of melodies. Look closer and you will see the rifts. With little resources at hand, Chagna Ram with his group has to face the challenges of cultural marginalization and urbanization. He fears that due to lack of recognition, their art form will eventually die out. In such circumstances, he understands the role a digital platform plays in an artist’s life. It is an effective method, he believes, to reach a wider audience, a new audience who would otherwise be sitting in front of their tv sets and encourage them to take interest in folk music.