Folk from the Hills

Gaddi community has both lower and higher castes. They follow a very different culture and traditions making them different from the other communities. They have a beautiful culture of folk songs which is divided according to the occasions that occur in ones’ life. They are mostly found in the Indian states of Himachal Pradesh. They follow Hindu religion and belong to several castes like Brahmin, Rajput, Dhangar, Khatri, Rana and Thakur. They have preserved their traditional culture in the original form till date. Gaddi music can be divided into various categories like marriage songs, festivity songs, love songs, historical songs, and religious songs.

Gaura asks about the sound she could hear approaching

What is this sound of chhai and chakk approaching

The sound chhai and chakk approaching is of a Nagada

Leave all the pampering by your mother

Leave the comfort of your father’s lap

There is fog in the valley

Neelam and her group are fabulous performers on one side while they sit and sing on the other the dance performers present a beautiful dance with lovely synchronizations and choreography. While singing these songs they dressed up in their traditional costume which is quite unique. The men wear a frock like a cloak of white called ‘Chola’, which is secured around waist with many woollen sashes. They wear a high peaked cap which is pulled down over the ears in severe winter. The female dancers wear the traditional Himachali dress while performing, which is specifically worn by brides at the time of marriage. The flaring bottom gown is called Nuachadi; the covering dupatta is called ‘reeda’; and the black ‘dori’ tied on the waist, which is said to be worn by Lord Shiva when he became a ‘Jogi’. The accessories used for ‘Shringaar’ are Chidi and Maang Teeka (the head accessory), Chandrahaar (the silver necklace), Gojri (silver bracelet), Nath (a big nose ring). 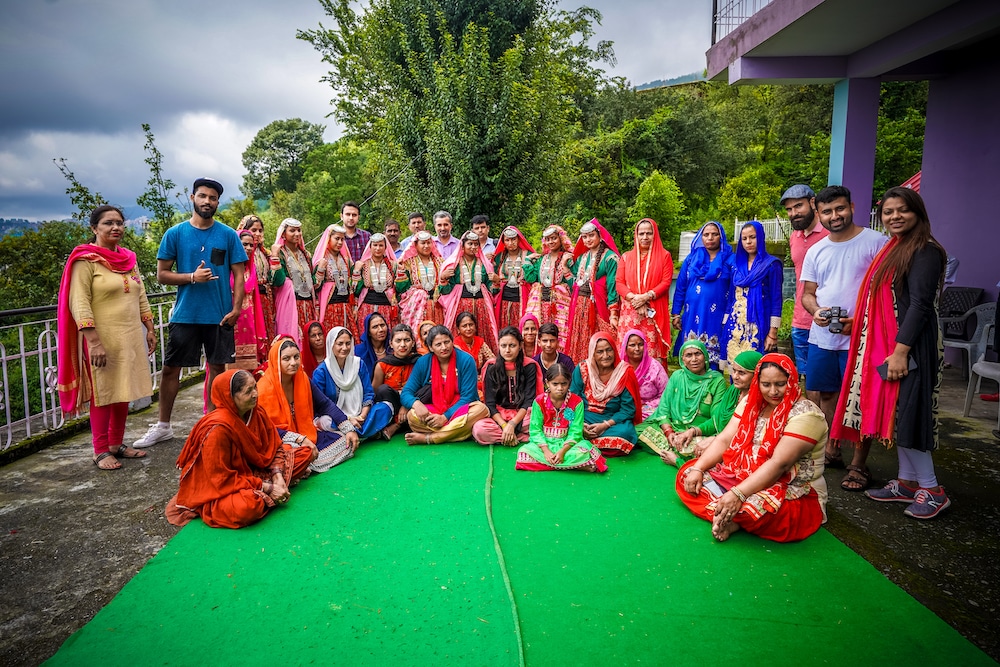 Gaadi community has a culture filled with various types of beautiful traditions residing in the valleys of Chamba and Dharamshala in Himachal Pradesh. In this serene land, we met this group that consists of 12 women singers, and 2 male singers accompanied by 8 female dancers. They perform the rare art form ‘Nuvala’, in which the community singers depict the folklores of Lord Shiva and Goddess Parvati’s marriage rituals. The songs are about the various events of that wedding. Most of the young girls of the group have learnt singing and dancing from their Guruji, Janme Jai Singh Guleria Ji who has performed for Dharamshala radio station also in recent years. The group is extremely talented and thus are professionals in the art forms like Nuvala (marriage of Lord Shiva), Jamkaara (fun moments at the time of marriage: songs about teases and taunts about the bride and bridegroom), Suhaag (girl’s marriage) and Sehra ( boy’s marriage). They also sing devotional songs of Baba Ji (a local deity bhajan) at ‘Jaagrans’ in Dharamshala.

The group strictly follows the traditional folk song like – Shiv Kailasho ke Vaasi, Bhole balle shaami ka byaah, Jaanni Shiva teri hanjue bo hoi, Mahadeva o mahadeva paanch abe vo kara jo jaanda mere dhudua (other names for Lord Shiva), Sanja riya bela mera day, siddh bo jogi aaya, aaya bole lallariya laal chidi, etc. Their art form includes the Nuvala adance forms which include the female dancers too who wear the traditional Himachali dress while performing, which is specifically worn by brides at the time of marriage. The flaring bottom gown is called Nuachadi; the covering dupatta is called ‘reeda’; and the black ‘dori’ tied on the waist, which is said to be worn by Lord Shiva when he became a ‘Jogi’. The accessories used for ‘Shringaar’ are Chidi and Maang Teeka (the head accessory), Chandrahaar (the silver necklace), Gojri (silver bracelet), Nath (a big nose ring). The group gets around 1 to 2 shows per month but that too usually varies according to seasons. They perform at the time of Baisakhi (besoa) and Lohri (khichdi), and in marriages. Average payment received per show is never fixed payment and sometimes they also perform without charging any fees. For their performances, they use instruments like Dholak, Ghartaal and Kaansi. The songs are played in a particular style which is highly appreciated by the locals over there. The melody of the songs is so catchy and attractive that one automatically starts swaying with the tunes of it. There is a small village in the Dharamshala known as Chinmay Mahila Mandal. The group consists of all women who sing beautiful traditional folk songs sung during different occasions based on different situations like – weddings, birth, etc. The songs are they sing are very enjoyable and definitely, an add-on to the fun. Something very unusual and wonderful about the group is that they don’t have any group leader. It’s all the ladies who decide the things together and perform at different locations. They have been invited to various location to showcase their performances. We asked them that what is the best venue they feel is to document their songs, all together they told the same – a nearby temple. Indeed it was an exotic location as there was a temple at the bank of river Beas with a huge Banyan tree alongside making it worth watching.

The group performs at all the functions held at the village. They are simply women who are all housewives and are passionate about the songs they sing and write too. They are not very literate but still manage to write in their language and compose. Their songs are about making fun of the groom or bride before their wedding. They only sing in the Kangri language. All the ladies have children and husband at home but it is really appreciable that all of them lend their support to what their wives or mother want. Once the set up was done the ladies began to sing and the songs were so entertaining and go so well with simple instruments like dholak and manjira. They don’t want to be very famous or known by all they have a simple dream in which they see themselves earning something out of their music so that they too could take care of their families. 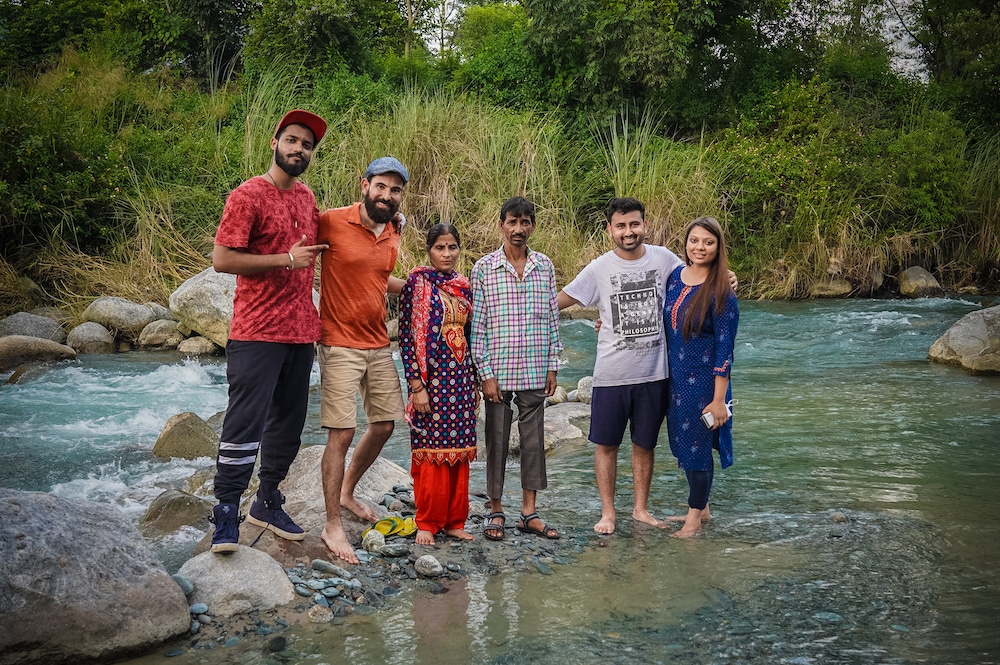 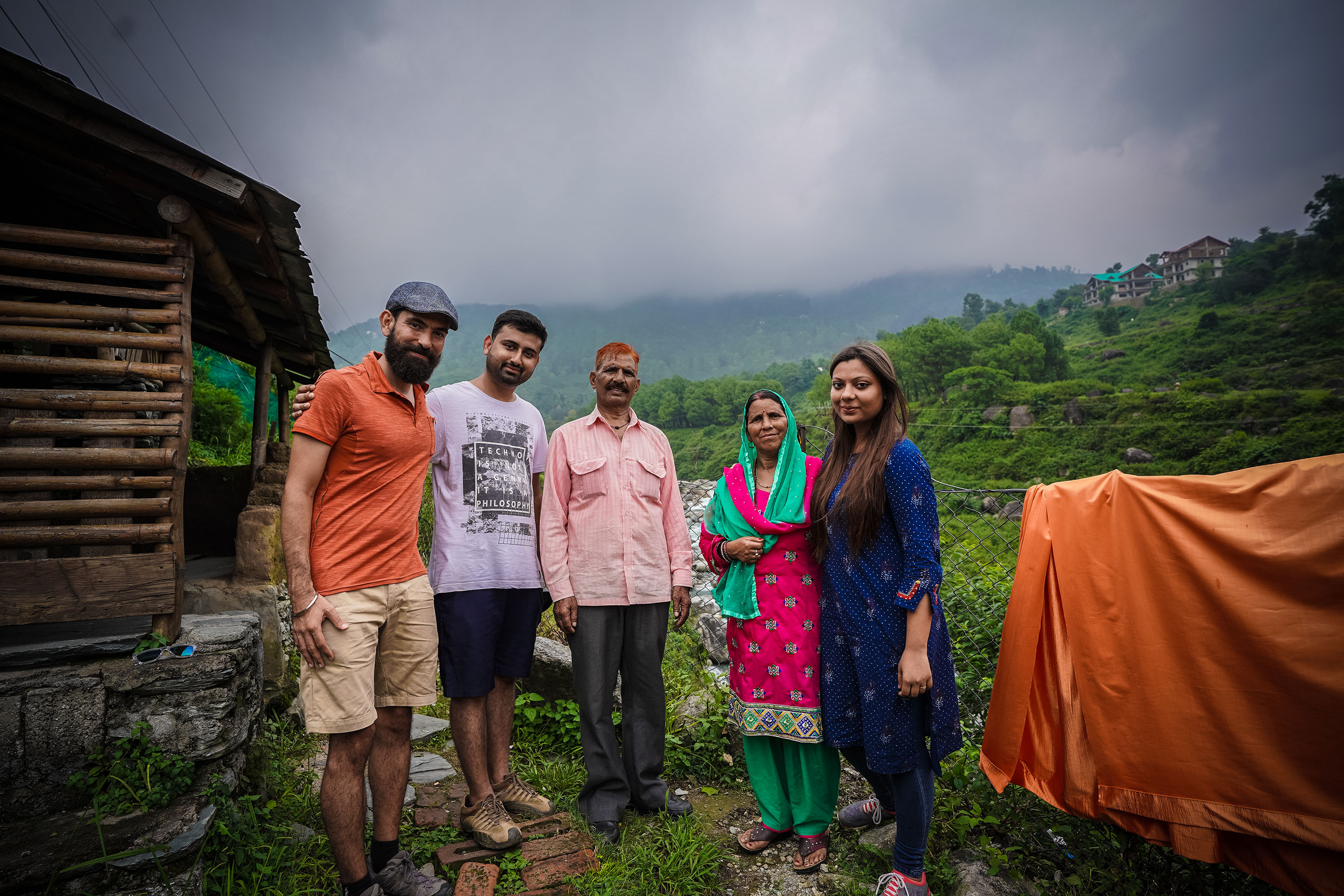